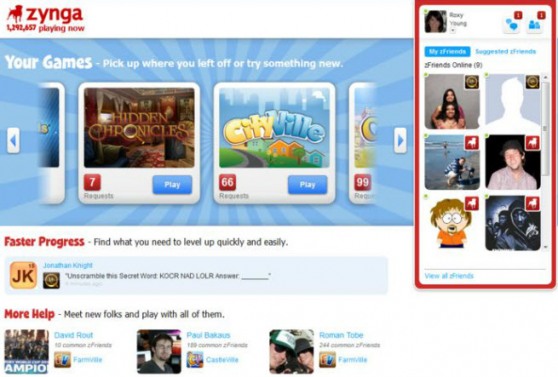 Zynga.com just went live. Announced last week, the web site is a new destination for Zynga’s gamers, who have been largely confined to playing games on Facebook.

The San Francisco social gaming giant says the site is aimed at making games more convenient and accessible for the mass market of users who don’t already play games on social networks or other platforms. Zynga executives have not been bashful about their ambition of getting a billion users to play the company’s games.

The system is integrated with Facebook, since it uses Facebook identities to set up networks of friends, and it also uses Facebook Credits to fulfill virtual goods transactions. Now the company’s 240 million monthly active users on Facebook will be able to join a destination site where the users are all gamers, in contrast to Facebook, where a quarter of the people play games.

Zynga is also launching its Zynga Platform for publishing games that are built by external publishers and developers. The new site will give Zynga a measure of independence from Facebook, but the companies are still glued at the hip and working closely with each other.

Zynga chief operating officer John Schappert said in an interview with VentureBeat last week that Zynga will use Facebook Credits as the underlying virtual goods payment system for Zynga.com. Facebook takes a 30 percent tax on every Facebook Credit transaction, and most analysts believed Zynga would move off of Facebook to escape that fee. But by using Facebook Credits as well as Facebook Connect, Zynga is showing its alliance with the social network is still pretty tight. Of course, if relations with Facebook ever get frosty, Zynga could turn on other forms of virtual goods payment.

With the Zynga Platform, Zynga is behaving just like a game console owner does. It publishes its own games as a “first party” on the platform. But it also recruits promising companies to create their own games to run on the platform as third parties.

The third-party developers can get access to promotions that will get their games in front of Zynga’s users. They will also get access to the functions and viral channels that help increase social engagement. An example is a Social Stream on the Zynga.com home page, where users can click on objects and directly import them into the game without interrupting game play.

The platform could be very attractive to third-party game developers who also need analytics to drive their understanding of users. Zynga has long used this as a competitive advantage, revising its games on-the-fly to be as user-friendly as possible. Zynga measures social engagement in its games through a metric that looks at a player’s “active social network.” The number of active neighbors that a player engages with in a game directly impacts how meaningful an experience they have. Those with good numbers are likely to continue playing.

Zynga will also use zCloud, its public-private infrastructure for hosting games at its own data centers. That zCloud will help the games from smaller developers skyrocket based on demand, rather than being held back by weak infrastructure. A number of third-party developers have already signed up to be Zynga Platform partners, including Mob Science and Row Sham Bow. More are expected. With this new business, Zynga is effectively offering its own version of Amazon Web Services.

Many of Zynga’s games require a player to get 10 friends to help with a task before the player can progress. With Facebook, the player has a risk of alienating friends if they spam them with such game help requests. But on Zynga.com, all of the members will be game fans, and player profiles will enable them to easily find like-minded gamers. When you inspect a potential friend’s record, you can see how often that player helps other players. It’s also easier to embark on joint quests with friends in real-time.

Zynga will provide five of its top games on Zynga.com when it launches in early March: CastleVille, Words With Friends, CityVille, Hidden Chronicles and Zynga Poker. More third-party games will also be available soon.

Zynga.com could become a powerful tool for promoting and discovering social games. Not every Facebook gamer will sign up for Zynga.com, but those who do will self-segment themselves into the most loyal fans.

Players can sign up at Zynga.com to create a new game-playing identity for themselves. But players can easily log in with their Facebook identities and play games with existing Facebook friends. Or they can play with their “zFriends.”

Because Zynga has engineered the game site for speed, it can run games a lot faster than Facebook does. You don’t have to wait for a message to be posted to a news feed or wall — a process that can take many seconds on Facebook — if you just want to announce an achievement to your friends. The Social Stream can also get you access to items in a game without forcing you to leave your game board. You can chat in real-time inside a game, and send gifts or messages without leaving the game.

The Zynga Platform, first introduced as Project Z in October, the work has been going on for some time. Of the delay, Schappert said, “Development is complicated. We feel it is now in a good state for the masses of consumers.”