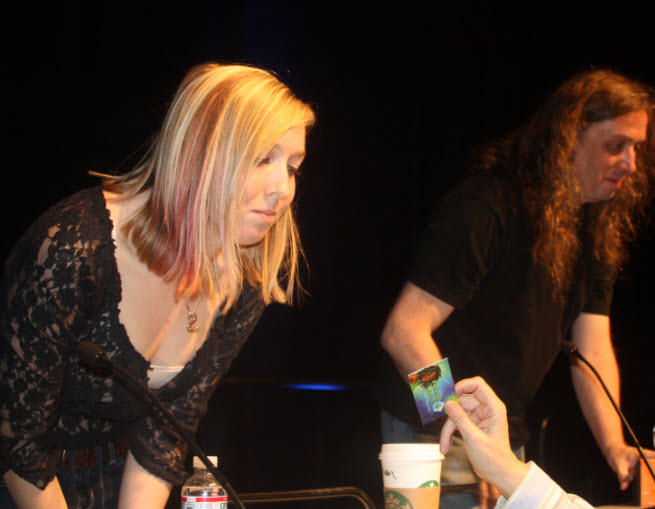 Designing games for teenage girls can be a gold mine on the iPhone or Android mobile devices. But it’s also pretty tricky, if you happen to be a male game designer in your 40s.

Fortunately for Graeme Devine, the founder of GRL Games and a well-known developer of hardcore games, he has a captive focus group in his own daughter, Roque, who appeared alongside Devine in a talk at the Game Developers Conference today. Graeme talked about making a game based on ideas that came from Roque (pronounced Rocky, pictured above left). 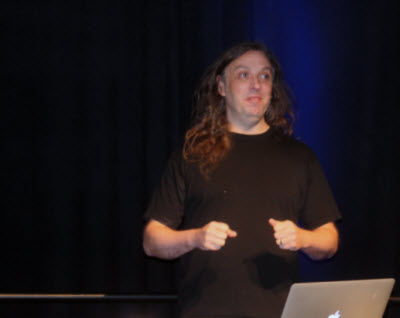 Devine has earned his chops as a game designer. He co-founded Trilobyte and made the classic CD-ROM hits The 7th Guest and The Eleventh Hour. He also worked on Quake III Arena as a game designer at id Software. He joined Apple in 2009 to help ensure that game developers were making great games for the iPhone, then left in December 2010 to develop his own games.

Devine has been making both simple and complicated games for iOS, such as Solitaire and Word Chat, but he decided to consult Roque for a game design from the ground up. Graeme figured she, a big fan of mobile games and a person in the key demographic market, would be good at envisioning a game that he could build.

Roque said she wanted a dance game and couldn’t find good ones in the App Store. She wanted a game that was both simple (in that it that was easy to learn and play) and complicated (allowing players to go deeper if they wanted to). She thought of games like Paper Toss and Angry Birds as achieving that combination.

Roque said she was influenced in her game design by LMFAO, a comical pop group that has a hit with the song Party Rock Anthem; the old Sega dancing game Space Channel 5; and Temple Run, a simple swiping and running game. The results will be a game called Dance City, targeted to come out on the iPhone in the coming months. The game lets you dance anywhere in a city.

“Observing a teenager doesn’t work,” Graeme noted. “So I found I had to find time to talk with her. But in a different way. She’s the smart one. She has the game design in her head. That is an interesting conversation to have.”

The lessons from the collaboration so far are that you need “obvious navigation” at all times, where there is no point in the game in which you don’t know what to do. The game should also be free to play, Roque said, because teenagers don’t have a lot of money and are careful about what they spend it on. The game should also allow for customization with media outside the app, like where you take a picture and bring it into the game.

The father-daughter development team also found that friends want to play each other in a game on their own schedules. They don’t have time to meet at a particular time to play a game, so they can take their turn one at a time and send the turn back when the time suits them. That asynchronous style of play is easier to accomplish than real-time, peer-to-peer play.

The game should give people a chance to show off their individual achievements via social media. But it shouldn’t force teens to spam each other, because “spam is ignored as evil,” Graeme said.

If game developers don’t have access to a teenage daughter, they should seek teens out in groups by doing things such as visiting a school to give a lecture and then asking the group what they want in a game.