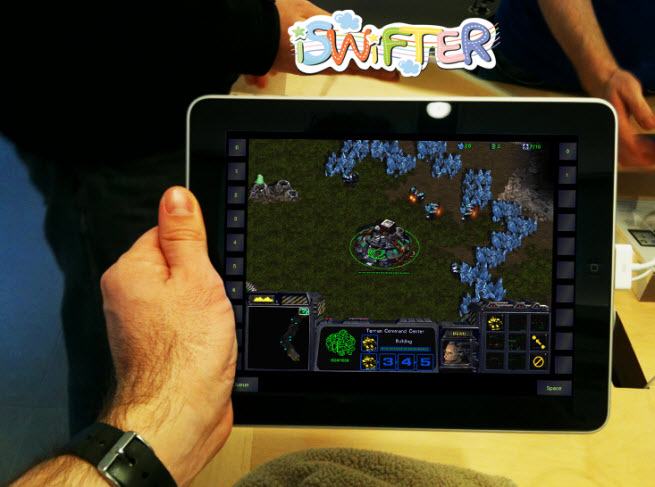 iSwifter found a niche for its cloud streaming service by enabling Flash games to run on the iPad. Now it is extending its platform so that a wider swatch of PC game companies can stream their games to Apple’s tablet.

This means that PC game makers will be able to take games from their older library of games and, without much effort, get them running on an iPad. As you can see from the picture above, iSwifter has been able to adapt Blizzard Entertainment’s original StarCraft game. As such, iSwifter can make it easy for game publishers to find a new source of revenue from their older games by adapting them to new platforms where users are plentiful.

“We are bridging the applications of the PC era with the devices of the mobile era,” said Rajat Gupta, chief executive of iSwifter, in an exclusive interview with VentureBeat.

Menlo Park, Calif.-based iSwifter takes advantage of the cloud, or web-connected data centers. It runs a game, such as a Flash-based Facebook game, in the cloud. Then it streams video of the games at high speeds to a mobile device like an iPad. The interaction over a broadband connection is fast enough so that the user doesn’t notice that the game isn’t actually stored or computed on the iPad. The service operates functionally much like Onlive’s or Gaikai’s cloud gaming services.

Since Adobe gave up on running Flash on mobile devices, it has created a big problem for developers who have a lot of content on the social networks or the web and want to move it to the iPad. But it’s hard for them to do this if it means rewriting a lot of code. iSwifter handles the conversion and makes it possible to run the exact same Flash game on an iPad.Users can download iSwifter’s browsing app and play it free for 30 minutes; after that, it costs $4.99. The games run smoothly as if they were running in a native format.

While OnLive and Gaikai are using streaming to reproduce a high-end 3D graphics experience on lesser hardware, iSwifter isn’t going that far. it is taking games with medium-quality graphics and getting them to run on new devices.

“Now we’re ready to apply this technology in a broader way,” said Peter Relan, chairman of the YouWeb incubator that spawned iSwifter in 2010. iSwifter has since spun off and become its own company with 30 employee. According to Relan, “We want to license it to PC makers who want their games streamed to iOS and Android mobile devices.”

Relan said that iSwifter was growing at a $10 million annual run rate. The company has already licensed its iSwifter technology to an unnamed large game publisher that plans to convert a library of PC games to run on iSwifter on the iPad. That company and a couple of other licensees are likely to launch games in the second quarter.

Over time, iSwifter will like be expanded so that it can handle multiple applications, not just games. It could do productivity apps, much like OnLive does with its Office-capable OnLive Desktop service. iSwifter has also launched its Rover browser for educational purposes. As iSwifter expands into other territory, it will compete head-on with OnLive, which has also moved into iSwifter’s market on the iPad.

“This can be expanded to bring rich interactive apps to any mobile devices,” Relan said. “It opens up a whole new world of business.”

Gupta said the company will try to recruit more licensees at this week’s Game Developers Conference in San Francisco.