Apple and Blackberry aren’t the only fruit-flavored brands that can cause a stir with new hardware releases. The UK-developed Raspberry Pi is a credit-card-sized, bare-bones computer selling in two variations for $25 and $35 respectively — slightly less than an iPad 2 plastic cover.

After the Raspberry Pi’s pre-order launch through two resellers caused temporary website crashes, VentureBeat caught up with Eben Upton, Director of the Raspberry Pi Foundation. He is thrilled that “demand has been absolutely enormous.”

The Pi is available internationally through outlets Premier Farnell and RS Components. There are no plans to increase the number of distributors for the foreseeable future as “these companies are in a position to build a very large number of devices,” adds Upton. He believes that the backlog of “many, many tens of thousands” orders will be addressed by late April.

That’s a lot of excitement for a new hardware platform from a non-profit organization. The Raspberry Pi Foundation is a UK registered charity that wants to foster programming skills among students and promote the study of computer science.

Eben Upton clarifies: “Remember that our priority goal isn’t to build computers. Our priority goal is to encourage people to learn to program. Building computers is like a side effect. We have to do it because we don’t believe there’s a good platform for teaching available. It’s a necessary step — and a good source of money to help us to achieve that goal.”

Upton assures us that North Americans ordering a Raspberry Pi don’t have to feel bad about taking something away from British school children. “To be honest, I think our first orders will mostly go to middle-aged guys, because these are the people who already know about computers and are in a position to make use of what is currently a very bare-bones platform.” Upton is counting on “the hackers” to support the new platform with software that will help the Pi become a good classroom product. 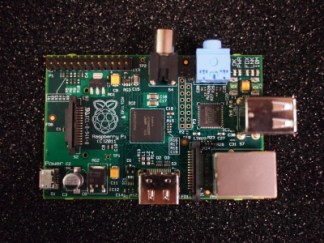 Both Raspberry Pi models are equipped with 256MB RAM, an 700MHz ARM processor and a VideoCore IV GPU capable of Blu-ray quality (1080p) video playback. The hardware architecture is not too different from smartphones, which should help software developers: “It has a lot of graphical performance. It is a really good platform to port iOS or Android apps onto,” says Upton. “We already have some early developers out there who have taken apps from a mobile device [to the Raspberry Pi], and found it performs very well.” So does the Foundation have any plans for an app platform? “That’s an interesting question. I think we would like to do something in that area, but we haven’t had a chance to do it.”

Regarding additions to the product portfolio, Upton responded, “I have no comment about future products. Read into that what you will”.  And even if the Raspberry grows into a big computer brand, he doesn’t envision the charity turning into a regular corporation: “It’s nice to be free of the pressure that comes with running a commercially funded startup. There’s always pressure to do things because they make money rather than they’re the right things to do. [The Raspberry Pi Foundation] will make money, but that money goes back into supporting what our primary goals are.”

In his day job Eben Upton is a technical director at semiconductor company Broadcom. His employer is very supportive: “Broadcom has a long track record of supporting initiatives in science, technology and engineering education. So it’s a good alignment between what Broadcom likes and what the [Raspberry Pi] Foundation is trying to do.”

Broadcom also supplies the BCM2835 system on a chip for the Raspberry Pi boards. Although the non-profit status makes it easier for the Foundation to negotiate discounts with parts suppliers, Upton emphasizes that his employer is not cutting Raspberry a sweetheart deal: “Broadcom is making money. All of the components are purchased on commercial terms, we’re not subsidized.”

This also means that the Foundation is not receiving any money from the British government, though it has been cultivating a fanbase in high places: “Senior levels of government in the UK are aware of what we’re doing and I understand that they are very enthusiastic about it. Education secretary [Michael Grove] in the UK is a fan, he mentions us a lot. My understanding is that George Osborne, the Chancellor of the Exchequer, is also aware of what we’re working on. So we certainly have a certain amount of passive support,” says Upton.

We couldn’t help asking Eben Upton whether fellow Foundation trustee David Braben is secretly working on a Raspberry Pi version of his landmark space game Elite. “I see him maybe every few weeks at trustee meetings and haven’t had a chance to ask him whether he would be interested in doing that,” replied Upton, “He’s like a local hero [in Cambridge], we’re very lucky to have him involved. We were extremely pleased when he agreed to join the trustee board; he’s obviously an extremely well-connected guy. He can add a lot of value to the project even without writing a version of Elite.”