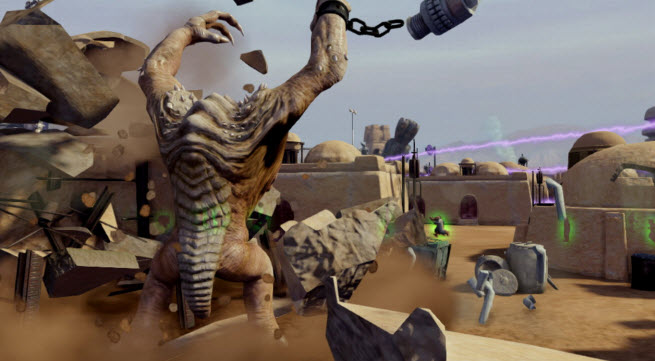 Kinect Star Wars is one of the most anticipated games that will use Microsoft’s motion-sensing platform for the Xbox 360. It is a flagship game that will test whether the gesture-based control really accurate enough to make you feel like a Jedi Knight swinging a lightsaber. 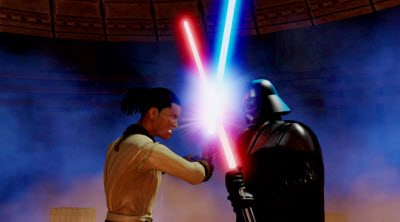 Kinect Star Wars makes use of your full body motions so that you can live out your fantasy of using the Force and wielding a lightsaber with no controller required. To keep Xbox 360 hardware sales going as the console ages, Microsoft needs games like this that give players a reason to buy and use Kinect, which is sold as an accessory for the console.

LucasArts and Microsoft showed off a preview of the game last week, showing off gameplay modes that will make you sweat when you play. One of the most interesting was when you get to play as a Rancor, a vicious monster on the desert planet Tatooine. As the Rancor (pictured above), you can go on a rampage through a city, picking up people and tossing them like rag dolls. You can destroy buildings and your goal is to do as much damage as possible in a given time frame. The time limit makes sense because you’ll get pretty tired if you try to do this for a lot of hours. That part of the game is just crazy fun.

The core play of wielding a lightsaber also looks entertaining and accurate enough for fighting. That’s one of the big questions about the game, since Kinect hasn’t been that easy to control in other games. 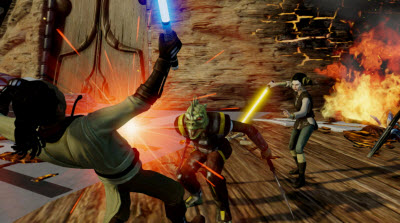 The different play modes show there is a lot more to do in the game than just swing a lightsaber. The animations for the duels are augmented so that you look a lot more heroic. You use your left hand to wield The Force, picking up enemies and tossing them aside. You swing at enemies with your right hand. If you push your left hand forward, you can send a Force shockwave at the enemy and knock them backward. You can also kick enemies, or jump up in the air. When you do so, your character does a flying leap over an enemy and lands on his or her feet, ready to attack from behind. If you play in cooperative mode, then you can pick up an enemy and someone else can take it out.

In the early part of the campaign, you start on Kashyyyk, the home planet of the Wookies, the “walking carpet” characters like Chewbacca. There, you run into Lizard-like enemies working for the evil Trade Federation. You have to dispatch them with all sorts of Jedi tricks, and then wonder what those Lizard-heads are doing in cahoots with the Trade Federation. 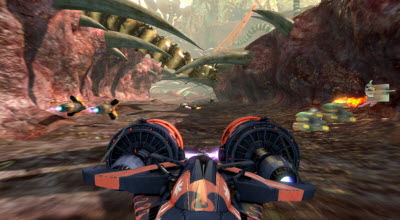 The developers vary the gameplay so you don’t get so tired. You can fight in land speeders and fly space ships and engage in space combat.

The player can also pilot “podracers” on the same desert canyon track, Boonta Eve, from the Star Wars Episode I: The Phantom Menace film. In podracing, you hold your hands out in front of you and turn the racer by pulling your arms as if you were holding the reins of a horse. You can gesture to the right or left to bump your opponents off the track. You can also fire a power-up by raising your right hand. The podracing takes place on eight different planets from Bespin, the cloud city, to Coruscant, the seat of the empire.

And a bikini-clad Princess Leia will be among the characters who will be able to partake in a  Dance Central style mini game. Among the playable characters are C-3PO (pictured) and R2D2. In that mode, you dance for Jabba the Hutt. 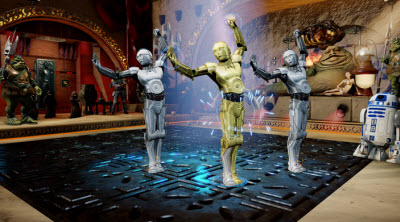 Players can jump into the game or out in two-player mode, or fight duels against Darth Vader in one-on-one duels.

The game also has a stereoscopic 3D mode so that you can watch the imagery in 3D. That part seemed like just a gimmick to me, and there’s no point in spending money on 3D unless it comes for free with the next TV you buy.