Following the use of social media in the Arab Spring uprisings, Twitter has added more support for a few of the languages of North Africa, Central Asia, and the Middle East, including Arabic, Farsi, Hebrew, and Urdu.

In a blog post, a Twitter spokesperson revealed the new language support is due to the work of a large and diverse group of volunteers.

“Among those who donated their time and translation skills to make right-to-left languages a reality on Twitter [are] a Saudi blogger, Egyptian college students, a journalist at the BBC, IT professionals in Iran and Pakistan, an Israeli schoolteacher, the co-founders of the grassroots #LetsTweetInArabic campaign, academics specializing in linguistics, and teenagers in Lebanon.”

In conflict-torn areas of the world, Twitter execs and others are hoping that social media can help bring people together and unite them over commonalities. As the company wrote of the #Jan25 tweets, “A single tweet can bring you closer to neighbors and heroes, immerse you in political change or disaster relief.”

Here’s a map we made to illustrate Twitter’s new geographic reach: 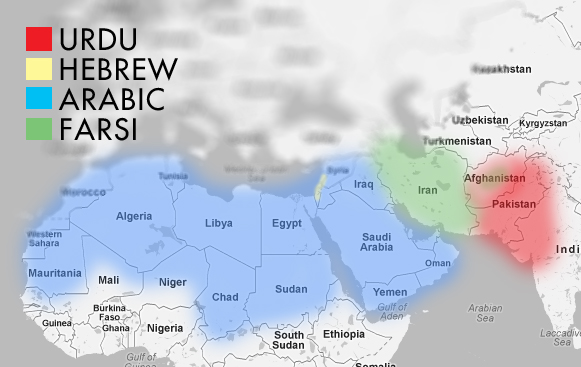 Right-to-left translation efforts began in earnest in January 2012. Before then, right-to-left languages were not available for crowdsourced work in the Twitter Translation Center, where hundreds of thousands of volunteers work to bring Twitter to more languages and geographies.