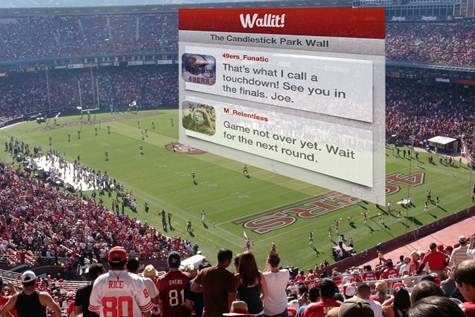 With Wallit, a free new iOS app launching today, real-world places are finally getting the equivalent of Facebook walls of their own.

The app lets you leave text, photos, video, and audio messages on virtual walls for specific locations — but only if you’re actually there. The virtual walls are also viewable through a slick augmented reality mode, which lets your Wallit contributions appear like digital graffiti layered on a location.

“We are trying to socialize augmented reality experiences,” Wallit founder and CEO Veysel Berk told VentureBeat in an interview. Berk has experience with building social networking platforms, but with Wallit, he wanted to bring a social aspect to real-world locations as well.

Unlike Foursquare, you can actually hold conversations at locations using Wallit. It also differs from location-based chat services like Yobongo and ChatSquare by allowing you to leave lasting messages at specific locations. Wallit’s augmented reality (AR) aspect, accessible by holding your device in a portrait orientation, takes the conversation a step further by having its virtual walls overlayed on top of your phone’s camera feed.

“With location at the center of our system, augmented reaity is just the natural extension of that,” Berk said. Most other AR apps only allow you to view location-based content, Wallit is one of the few to let you literally leave your mark on a location.

While you can only contribute to Wallit’s virtual walls if you’re actually near a specific location, you can still view entries created on any wall from anywhere in the world. You’ll be able to like and rank specific Wallit posts, and Berk tells me that the company will be using some automatic filtering as well to keep junk entries to a minimum.

The company says that an Android version of its app is on the way. It currently has virtual walls in popular locations like New York, San Francisco, and Paris, but it’s adding more continuously. You can also request a specific wall be created through the Wallit app.

Wallit is based in San Francisco, Calif., and has raised $1.2 million in funding so far from investors including Sharmilla Mulligan, OpenTable Japan president Masao Tehima, Storm Ventures, David Kellogg, and others.