The next milestone includes $30 more, bringing the grand total spent up to $50. Of the 15 Spectre Packs purchased during this phase, you’ll notice a ton of duplicates, especially a lot of Drell Vanguards.

Each time you obtain a duplicate weapon, that specific gun is leveled up by one point (two if it’s a default option). You can level any weapon up to 10, and there are well over 20 to unlock.

Although there were some good finds, overall that felt like another $30 down the drain. Even with all the rare character cards, our class levels hadn’t changed much, and we were still missing a few specific races: 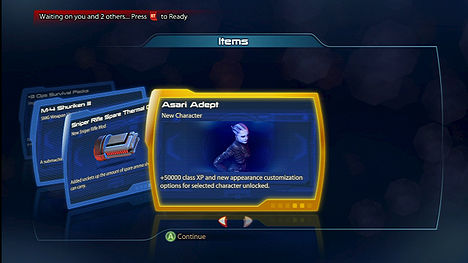 Note that the entire second $50 didn’t yield a single new character, leaving me with four empty slots on my class-select screen. XP also came to a crawl. I was hoping to get a character pretty close to level 20 without having to play a single match, but the highest I got was 12.

At $80 in, I unlocked the M-99 Saber, my first “N7” class weapon. Although I ended with plenty of options to choose from, the Geth Plasma Shotgun remained my go-to weapon, especially without the M-13 Raptor in my inventory. I was still missing lots of mods, and the ones I did have were not leveled up by much.

Supplies are special one-use items that are automatically equipped to the D-pad and available in every mission. I didn’t keep track of them until the very end since they’re not that important, and you get a ton of them. But the final tally is below.

The Medi-Gel definitely comes in handy as it allows you to revive yourself, and the Cobra Missile Launcher is vital for instantly taking down minibosses such as Atlas mechs. Somewhere along the way I picked up two missile capacity increases, meaning I can now storm into each battle with four missiles. On Bronze difficulty, there are usually only four Atlus mechs total, which makes surviving all 11 waves a breeze. 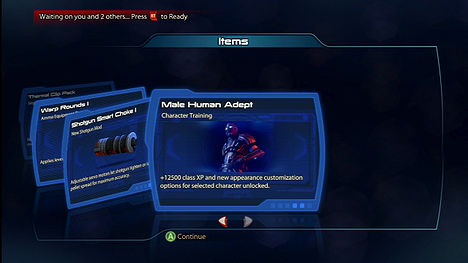 Had I not stolen the $100 out of GamesBeat editor-in-chief Dan Hsu’s wallet, I’d be feeling pretty gypped right now. After 50 packs of the best Mass Effect 3 multiplayer has to offer, I still don’t have a single level 10 weapon, I don’t even have all of the available characters (which there aren’t that many to begin with), and I didn’t pick up any of my favorite weapons from the campaign.

I’m sure there will be those who purchase just a couple packs and get some awesome stuff, while others will go on to have worse luck than I did. That’s the problem with gambling. But according to our little test, the odds are stacked against you in Mass Effect 3.