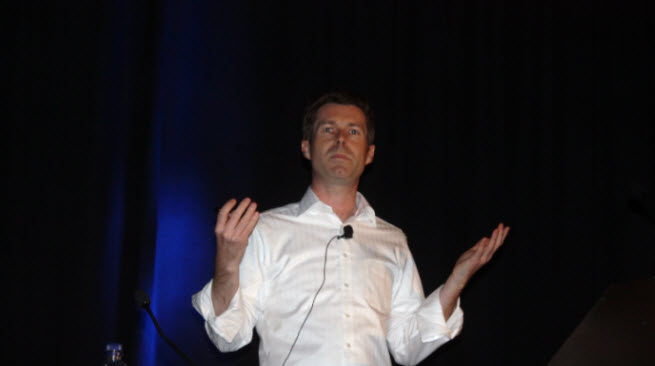 Mobile games are so plentiful that discovering the right one has become a nightmare. But Facebook believes that it has a solution in layering its own social network on mobile gaming platforms such as the iPhone and Android. By making games more discoverable, the social network believes it can justify its existence in the mobile world.

Half of Facebook’s 845 million users — roughly 425 million people — are mobile users. Facebook’s app on mobile lets those people connect with friends and share photos. But the app has also turned into a great way to get games noticed, said Gareth Davis, platform manager at Facebook.

“Our goal is to help consumers find your app,” said Davis in a talk at the Game Developers Conference in San Francisco today. “We have 60 million people discovering apps and games on mobile. We are committed to games on the platform, both desktop and mobile.”

The Facebook mobile platform launched in 2009 and has been evolving ever since, adding social channels, web payments, and a variety of new distribution features. The Facebook app is available either as a mobile web app or a native application on various mobile devices. Among the latest features: native linking, where a developer can direct traffic from Facebook to a native app and an easy payment system with the world’s carriers — AT&T, Verizon, T-Mobile, Vodafone, Softbank, KDDI, Orange, and Telefonica — that’s rolling out soon. Mobile partners among game makers include Zynga, Electronic Arts, Wooga, Glu, Storm 8, and others. And Facebook’s app works on 2,500 mobile devices.

“We surface the game for users,” Davis said. “They click on that and it takes them to the game or, if you are not an existing user, to the game in the App Store.”

The first part of embracing Facebook is using its single sign-on system that authenticates a user’s identity and links him or her back to their Facebook account on the desktop. Then the developer’s game can send information out to a user’s friends, the user’s news feed, and be found in search. It can send out game notifications, requests, and be found through bookmarks, Open Graph, and Timeline. People see it and they click through to the app.

“As soon as the player uses an app, we create a bookmark, which you can search and find,” Davis said.

You can, for instance, include a feature in your game that posts activities, such as playing a word in Zynga’s Words With Friends, to a user’s activity feed. Other players can see it and click into the game. You can use analytics from Facebook to measure everything inside the game to improve engagement and monetization.

In free-to-play games, where users play for free and pay real money for virtual goods, Davis said developers should use retail-grade merchandising. That means you should use tricks like having something cheap for a $1 purchase in the store as well as things that are expensive, such as a $200 decorative item that only “whales,” or high-monetizing players, will buy.

2. Single app ID. Use the same Facebook app ID for your games on all platforms to make it easy for users to play across platforms. When you do this, people can play with their friends in the same game no matter if they’re on the web, desktop, or a mobile device.

3. Publish via Open Graph. Publish compelling game actions to Open Graph, such as game scores and achievements. Use “player beat friend” and “player won” stories to allow players to celebrate and brag, and get greater distribution through Timeline and News Feed.

5. Use all social channels. Use all the social channels (https://developers.facebook.com/docs/channels/) available to you, including requests and bookmarks, so you get maximum distribution from all channels.

6. Native, deep Linking for native distribution. Decide if you want to take advantage of native linking, which will drive all feed stories and request notifications to your game in the App Store or Marketplace. This is done via a simple update to your game settings on Facebook. You can also implement deep linking support so that clicking on a game story takes the player to a specific piece of game content, such as the specific word played.

7. Social design. Build your app to be social from the ground up so people can find, play, and compete with their friends. Social features will personalize the game for the user, keep them engaged through play with their friends, and help your game spread faster through Facebook social channels.