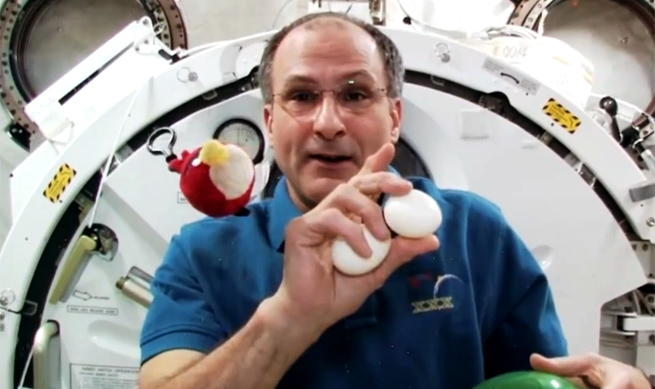 What happens when an astronaut plays a game of Angry Birds in real life on a space station? An awesome new video posted by Rovio showing just that.

The video was released to hype up the much-anticipated launch of Angry Birds in Space. NASA astronaut Don Pettit explains on camera at the International Space Station just how physics affect launching both Angry Birds and spaceships.

Pettit launches a red Angry Birds toy from a catapult while in zero gravity to explain trajectory. To add to the effect, he also blows up green balloon to make an evil pig and lets some “stolen” eggs float in the air in front of him. Of course, he makes the admirable pitch for people to learn math and physics so they can “get a neat job, a job sort of like mine.”

“We’ve got to see all of this in a weightless environment, which is what the Angry Birds Space game is going to be like with gravity fields from planetary bodies,” Pettit says in the video.

Angry Birds Space will be available for download on iOS, Android, PC and Mac on March 22. Personally, I cannot wait to play this installment.

Watch the full video below: