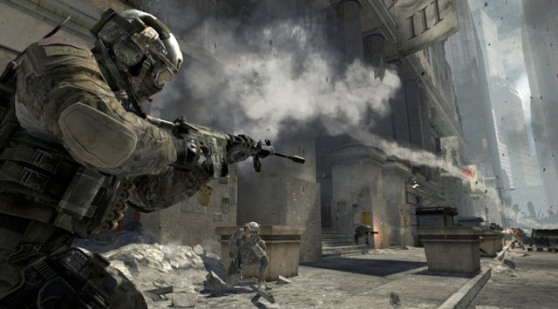 Video game sales fell 20 percent in February, with total industry sales falling to $1.06 billion from $1.33 billion a year ago, according to market researcher NPD Group.

The poor performance in February was a little better percentage-wise compared to January, when sales were down 34 percent year-over-year. Both January and Feburary had light release schedules for core console games. Sales are also likely shifting as the industry transforms to digital sales, which aren’t captured in the retail numbers.

NPD is working with research company EEDAR to try to come up with more accurate numbers for global digital and physical game sales worldwide. The top-selling game of the month was Call of Duty: Modern Warfare 3 (pictured), which was launched in November and is the top-selling video game of all time.

Anita Frazier, analyst at NPD, said the Xbox 360 was the top hardware platform for the seventh month in a row. Most other hardware platforms posted declines in the year. Sales of hardware were up 50 percent from January.

“There are four days of retail sales reported for PlayStation Vita in this reporting period,” Frazier said. “Overall, hardware unit sales increased by 62 percent over January without the Vita included. Including PS Vita sales, that increase is 87 percent.”

“The top-selling PS Vita game for the month, not surprisingly, was Uncharted: Golden Abyss, which landed in the top 20 for overall title sales for the month,” Frazier said.

The only new intellectual property in the month’s top 10 list was Kingdoms of Amalur: Reckoning from Curt Schilling’s 38 Studios and Electronic Arts.

“Three of the top 10 accessory items for the month were Skylander character packs,” Frazier said. “In total, these SKU’s accounted for more than $17 million in sales for the month, and if added to the sales generated by the software, Skylanders easily claims the top spot for content-related sales.”