Steal from the best, but make it your own, as the saying goes. Facebook has done just that by co-opting two concepts made popular by others in an effort to make its social network the first place people go to consume the news they care about.

Facebook introduced a new feature called Interest Lists on Thursday as a way for members to turn the site into their own personalized newspaper, featuring only the sections of their choosing. The lists are an intelligent hybrid of Twitter’s list feature and the social news movement, popularized by Flipboard and others. 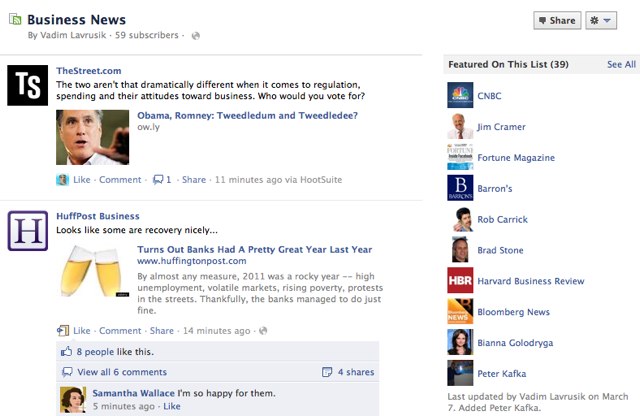 Interest Lists, created and named by people for people, are topic-themed collections of Pages and public figures on Facebook, and are akin to specialized news feeds for your favorite topics. The company has categorized lists in mostly traditional sections such as News, Music, Business, Sports, Politics, Lifestyle, and Entertainment, with the idea being that they will comprise the sections of your Facebook newspaper.

Interest Lists are yet another extension of Facebook’s Subscribe feature, introduced last September. They live on the left-hand side of the page for easy one-click access. If a story within a particular Interest List you subscribe to is seeing a lot of engagement, however, Facebook will push that story to your News Feed. Recent stories from Interest Lists may be also highlighted in the News Feed on occasion. 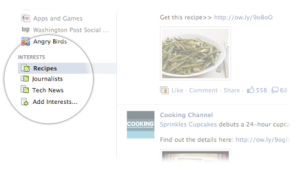 The feature is pure genius — even if it does take inspiration from Twitter. Here’s why: Facebook users can either package up the celebrities or things they care about into convenient little buckets, or they can let friends, strangers, and media organizations do the dirty work for them and just happily consume the curated content as it rolls out. And because Facebook appears to have recruited partners to seed lists for its new toy, there’s already a smattering of top-notch lists across a variety of categories just itching to be subscribed to on day-one.

Then there’s the journalist and media crowd. Both groups will love Interest Lists because they promise more exposure for their stories, more subscribers, more traffic, and new audiences that could become regular readers. I’ve previously called Subscribe a gift for publishers and journalists because it’s the ultimate in self-promotion tools. Following that logic, Interest Lists is the gift that keeps on giving. The lists are cyclical in nature. Facebookers ad you or your publication to a list, your personalities and stories net larger audiences, those audiences subscribe to the lists in question, and the cycle repeats itself. There’s also the opportunity for publications to play curator for their readers. 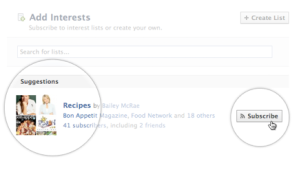 As for Facebook, the Interest Lists are absolutely a home run. Interest Lists have the promise of better distributing Facebook content to the social network’s 845 million monthly active users. More content, that people have an expressed interest in, means users will spend even more time on Facebook, and share, “like,” comment, and engage more, activities that will distribute content farther and wider. Engagement and time spent on site are bottom-line metrics that will eventually translate into more advertising dollars as businesses pump money into Facebook’s enhanced ad-products to draw the attention of these captive eyeballs.

The real kicker is that Facebook’s social newspaper experience, unlike the myriad of apps toying with the same notion, works independently of a person’s platform. On web, mobile, PC, or tablet? No matter. It’s just Facebook, so the experience stays the same and you can continue to get your news sections uninterrupted wherever you are. And because Facebook has made the lists an integrated part of the standard experience, users who forget about visiting sections will still be exposed to list content. The same can’t be said of Twitter’s lists.