With the rise of mobile marketplaces, outsourcing tedious or mundane tasks to a willing gopher has never been easier. Thursday, one startup seeks to make these mobile conveniences less intimidating for the masses.

Zaarly, one year after making a splash as the mobile app for getting a nearby stranger to bring you a beer, is hitting the reset button and releasing an entirely new 2.0 version that scraps anonymity in favor of identity, expressed through new picture-heavy profiles and reputation stamps. Zaarly, in essence, now hinges around trust.

“This is the culmination of everything that we’ve learned,” co-founder and CEO Bo Fishback told VentureBeat of Zaarly 2.0. “It’s very clearly a different product than it was.” 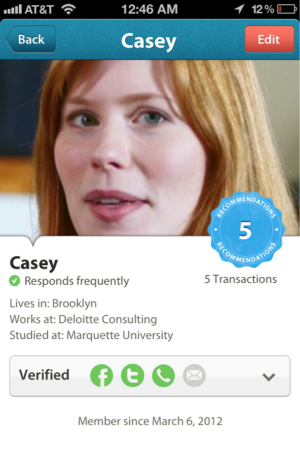 Zaarly debuted in March of last year as a predominantly mobile and local way for people to make a request for anything (a latte or an iPad, for instance), indicate how much they’d be willing to pay for said request, and specify a time frame for delivery. It’s original model, like Craigslist and Amazon, encouraged anonymity.

With most transactions happening in person, Zaarly discovered early on that identity and reputation would be key factors to its long-term success.

“The whole goal is to get two people together in person,” Fishback said. “We realized that if we did not have the human element inside of our marketplace, then it was never going to be able to turn into what we wanted it to be.”

The new Zaarly, evidenced in the just-released 2.0 versions of the company’s iPhone, Android and web applications, is now a more intuitive marketplace where customers can feel at ease selling to and buying from people who no longer are complete strangers.

Zaarly’s new profiles can be created from scratch or by pulling information from social networks. They feature photos prominently, include basic details about the user (lives at, works at, studies at), and highlight the number of connections a person has on various social networks to establish his or her legitimacy as a real person. Profiles even include reviews of every transaction the person has ever done. The profiles are carried through the entire experience, so that identity is front and center in transactions and member-to-member messages.

“Every listing has a face with it,” Fishback explained. “We’re bringing faces and people to the entire thing.” 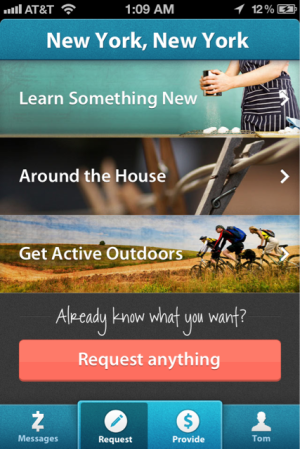 Zaarly’s makers also hope to infuse a bit of local serendipity with place-specific recommendations, so that each Austinite launching the application will be greeted with unique recommendations for the best for-hire favors to ask for from their neighboring peers. The idea is to stimulate transactions by making the experience far less intimidating for first-timers.

Zaarly will create custom lists for sellers that include time, date, event, weather, and place-particular suggestions. The recommendations feature is still a work in progress for most regions as the company seeks to glean a better understanding of each locale. Those attending South by Southwest in Austin, however, will get a very rich taste of these recommendations.

“It’s just a really powerful tool for us to start making extremely relevant requests and suggestions to people based on where they are,” Fishback explained.

Altogether, Thursday’s updates represent the startup’s wish to mature into a legitimate marketplace for consumers. “Our eyes are pretty set on Craigslist,” Fishback said of Zaarly’s grown-up ambitions. More than 50 percent of requests are for physical goods, he added.

Zaarly has roughly 300,000 users engaging with its application on a semi-regular basis, Fishback said, making its lofty goal of competing with Craigslist sound like wishful thinking. And then, of course, there’s the competition, an ever-growing crop of anxious upstarts that include the brand-new Exec and the formidable (and well-financed) TaskRabbit.

“The space is super interesting right now,” Fishback nonchalantly said of his competitors. “I think this space is going to be really hot for while.”