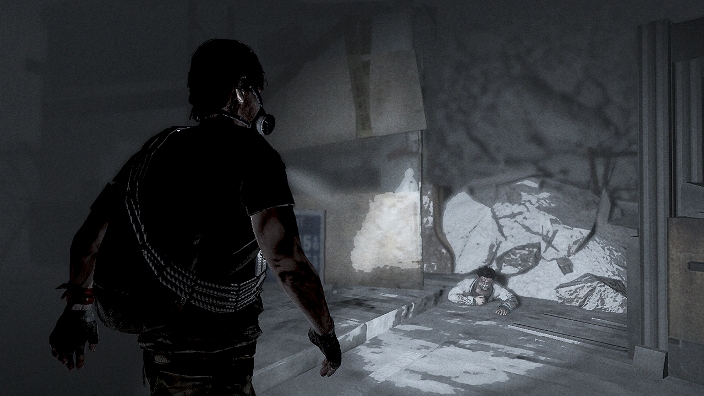 I apologize for being little late with this review. I got sidetracked attempting to fix an elevator (I failed) and patching up the broken ribs of a gang member whom I really should’ve been putting down instead (and I don’t mean by insulting him).

Plenty of games offer side missions (like the ones above), but I Am Alive’s may be the most stress-inducing. A simple task is usually anything but. In fact, every other minute of this post-apocalyptic trek was filled with high-heart-rate, nerve-wracking tension. And the strangest part of all of this? I Am Alive is actually fairly slow-paced and even boring at times.

I Am Alive is 100% raw, gritty survival. You won’t find any zombies or evil corporations here (even if one were behind this mysterious civilization-ending “event,” it’s nothing that the game explores). Lack of basic resources, suffocating dust, and common street thugs are your biggest threats.

As you roam the desolate, hazy streets looking for hints of your missing wife and daughter, you must grab what few supplies you can. A bottle of fresh water, a sealed can of food, a first-aid kit…even a single pistol bullet can mean so much here. Finding any of these is a major victory and worthy of an audible “yes!” during playtime, not only because of their rarity, but because I Am Alive is so damn tough and unforgiving.

Difficulty in that realism

You need these supplies because you will get hurt, and you’ll have no other way to make yourself unhurt. I Am Alive doesn’t coddle you. If an enemy stabs you, you can’t run and hide and wait for your health automatically replenish itself. If your health bar’s down, it will stay down until you use one of your consumables (think classic Resident Evil healing items, only way more rare).

If you start scaling the side of a building or a cliff wall, your stamina will drain — and your max stamina will go soon after that. In other words, if you accidentally overexert yourself, you can seriously damage your body (if you don’t fall to your death), making future physical activities that much more difficult. Again, some consumables can fix that, but if you haven’t gotten the idea already, those aren’t always easy to come by.

This risk-risk (no reward) system is incredibly stressful! As you start to tire during a climb, your character starts slowing down, the music starts increasing its intensity, and you start freaking out. If you can’t find a spot to rest, you either have to quickly burn through what few supplies you have or just…die. It makes the (admittedly more polished) climbing mechanics in an adventure game like Uncharted seem so trivial and arcadey.

Adding to the stress is your limited number of “retries.” You get three of these in between very spaced-apart save points, so dying and reloading is not an option you would want to exercise very often. When you’re down to the last retry, you’ll wonder if you should start taking high-blood-pressure medicine just to finish this adventure. Get through it, however, and you’ll be rewarded with the greatest sense of relief you’ve probably ever felt playing a video game.

It’s not just you using your own supplies; random survivors might need them, too. Do you give up your only med kit to help out an injured man who’s lying in the streets helpless? In gameplay terms, you get an extra retry as a reward, though these scenarios are more about the strength of your real-life “character.” You won’t get punished for ignoring him. But how will you feel when you walk away and hear him pleading for your help, knowing you’re probably his last hope, and he’ll probably die without your generosity? Can you live with that? 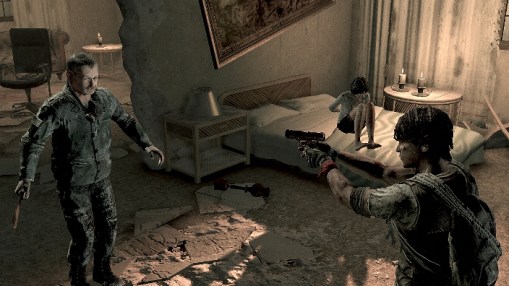 (Very minor spoiler alert…skip ahead to the next section if you’d like.) A most gut-wrenching scene comes later in the game. After I discovered that a gang has taken over one floor of an abandoned hotel to use as their rape headquarters, I head in to rescue one specific victim. In one scene, I overhear one thug about to start his “party” with a bound girl. “Now you’re going to get it from all of us,” he says angrily, as punishment for her spitting at him.

I believe the game gave me a choice here: I can kill the guy with a single shot from my bow, but that would use up my very last piece of ammo at that time (and he was positioned across a gap to where I wouldn’t be able to retrieve my arrow). Or I can look the other way. I say “believe” because I ended up not attempting to save the girl. I just couldn’t risk giving up my last shot in this den of evil.

As I write this, that scene still replays in my head in a most unpleasant way. That’s some powerful writing and acting. And I curse — and commend — the developers for making me feel so bad about some virtual people.

A desolate city leads to desolate action. Even though the hostile climate is itself an enemy, slowly draining you of valuable stamina in the thicker-dust sections, some of the levels are just too lengthy. The game will force you to do some backtracking, which is annoying (but still keeping with the “realistic” vibe), but at the same time (and rather inconsistently), it will also let you skip a lot of retracing your steps, too.

The thick fog, limited visibility, muted colors, and heavy, oppressive music can be a bit much at times, too, especially in the nighttime scenes (which will scare you in that Silent Hill way). This game will make you desperate for any reprieve like clean air and bright sunshine — things that don’t really exist in I Am Alive.

Although the story concludes in an extremely bold, also gutsy manner, the campaign ends up feeling like a giant side quest — one worth seeing through (who could say no to a little girl who’s lost her family?) but a side quest nonetheless. 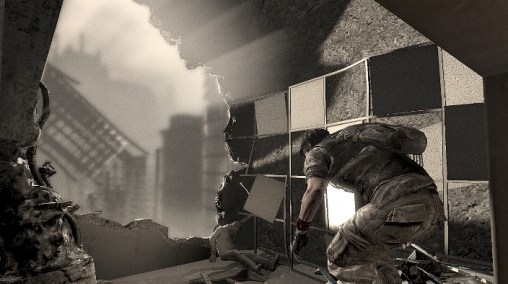 My friends have been asking me how this game is, and I tell them all the same thing: “It’s not fantastic, but you’ve got to experience it.” Not fantastic because, technically speaking, I Am Alive has some clumsy controls (where you can’t always get your character to do exactly what you want him to do), with some long, repetitive bits.

But in a time when most games want to baby us with giant “go here!” waypoints, regenerating health, and an overabundance of save and checkpoints, I Am Alive kicks us in the ass with heart-pounding, intense, and unforgiving gameplay. It takes a lot of chances, and as a result, it’s one that will stick in my memory for a long time to come.

I Am Alive was released on March 7, 2012 for the Xbox 360 (with a PS3 version to arrive later in 2012). A download code was provided by the publisher for the purpose of this review.