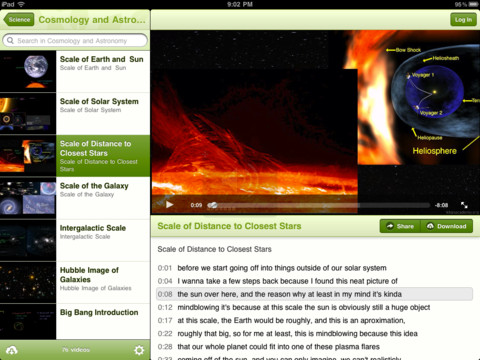 The Khan Academy released its iPad application today, bringing its new wave of education to the mobile world.

Currently, the Khan Academy has more than 3,000 videos of all different subjects in its education warehouse. With the app, parents, teachers, and students can watch students’ progress on these videos along with information about how long students took to answer practice questions, and whether they’re stuck on a certain topic. The app now allows you to watch these videos offline by downloading them to your iPad. You can also sync progress between your devices, according to Fast Company. For instance, if you’re watching a video on your laptop, it will pick up in the same place on your iPad to be viewed wherever you go.

People often repeat certain sections of Khan Academy’s videos to understand the topic better. In fact, creator recent Sal Khan attributed the success of his program to this ability to re-watch a lesson without the pressure of a human teacher. For this reason, the company added easier backtracking to its videos. A list of “subtitles” and associated timestamps appear below the video for you to click on and return to that segment.

The iPad app does not yet support practice exercises, but the company does plan to include them in the future.

Khan Academy is the brainchild of Sal Khan, who was working as a hedge fund manager when he started tutoring his younger cousin in math. The young girl could answer harder, logic-based questions, but was held back by her inability to understand units. After writing small programs to help her practice their tutoring sessions, he decided to create full-on YouTube videos for her to watch on her own. That’s where the idea took off, and soon he was tutoring up to 25 of his family members.

Apple has been getting into e-learning as well with its textbook initiative, iBooks 2. iBooks 2 takes existing textbooks and makes them into interactive e-textbooks, where students can watch demonstration videos, look up words as they read and more. Companies such as Inkling, Chegg and Kno have similar offerings as well. Apple introduced iBooks Author in that same initiative, which helps publishers automatically create e-books through drag and drop templates, as opposed to taking a print book and transforming it to meet the digital generation’s needs.

Schools have been experimenting with digital education and have been rolling out experimental iPad programs to see how students react to the technology. The Menlo School in Atherton, Calif. has had one of these programs in place for roughly a year. It gave iPads out to its eighth and tenth graders to read, do projects on and take home.

The Khan Academy iPad app is currently available in the App Store for free.