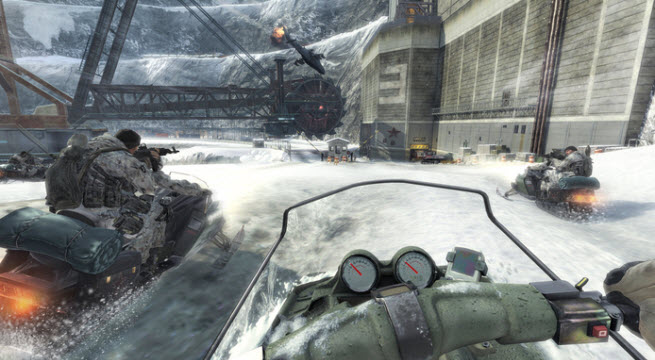 The newest content drop for Call of Duty: Modern Warfare 3 is nearing its release. We’ve already played the add-on maps — check below to see what you’ll be able to experience as soon as March 20, if you have an Xbox Live account and a subscription to Call of Duty Elite.

Activision Blizzard is releasing a new “content drop” for the hardcore fans of the modern combat game each month. The latest follows the release of the Liberation and Piazza multiplayer maps in January and the skyscraper multiplayer map Overwatch in February. Each month, subscribers who pay $49.99 a year can unlock new downloadable content. This time, players who enjoy cooperative play will get a chance to try something new.

In the first mission of the March content drop, you and a partner play cooperatively in a Spec Ops mission called Black Ice (pictured at top). One of you drives a snowmobile through a treacherous mountain road while the other rides on back and shoots at the enemies who come at you on snowmobiles or on foot. It’s not easy surviving long enough to get to the diamond mine, and I had to do make this run multiple times before my partner and I made it.

Once you get to the mine, you and your partner have to work together to take out the enemies guarding it. You fight your way inside, using machine guns and grenades to clear the path. You have to get deep inside, following one of a couple of different paths. Then you have to plant high-grade explosives to blow the mine up.

Once you set the timer, you then have to escape on foot as rivals either try to stop you or run for their lives themselves. The mission is pretty difficult, as you first have to master the snowmobile combat and then you have to try to speed your way into and out of the mine with time to spare. Once you master driving, you can switch so that you’re the passenger. 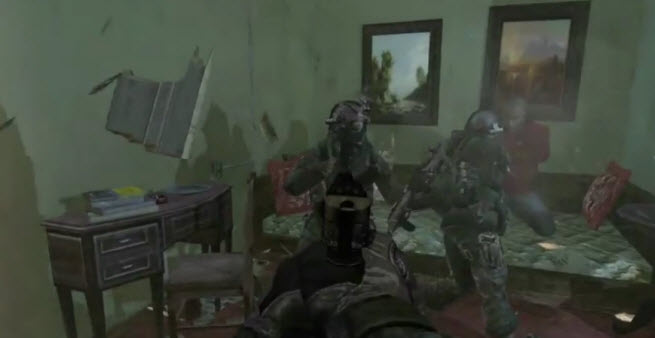 In the second mission, Negotiator (pictured above), you are in the middle of India. You and your buddy are being held hostage. You have to sneak up on a guard and steal his sidearm. Then you shoot him, grab a weapon, and have to rescue your partner before he is executed. If you shoot a hostage, then you lose points in the co-op mission.

Then you and your partner have to work together to free other innocent people, sometimes by breaching through doors that you have to stand by at the same time. When you breach a door, the game moves into slow motion and you have to quickly shoot enemies in bullet time (slow-mo) while avoiding shooting the hostages. In the first such scene, I had to avoid the first enemy I saw because he was completely covered by a hostage. Instead, I shot at other enemies to the right and then brought my gun back to the first guard to finish him off.

After that, my buddy picked up a submachine gun, and so did I. We went on to take on enemies in the streets. In the middle of the road was a minigun, but it had very little cover. Using the minigun can help you take out a dozen enemies as they file through a narrow corridor. But you’re vulnerable out in the open, so it’s a risk-reward trade-off. The best thing to do is to toss a flashbang grenade to slow a bunch of enemies down and take them out with a frag before you move to the minigun.

This mission is very replayable because you have to complete it with the fewest hostages killed. And if your buddy gets shot, you have to move to him quickly to revive him or you lose the match. 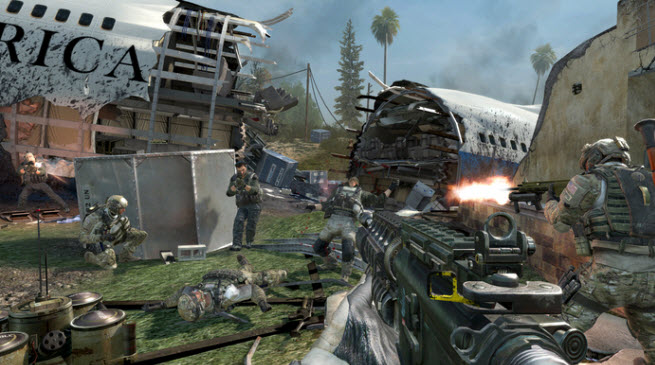 The Black Box map (pictured above) is a residential neighborhood in Southern California where Air Force One has crashed. In the survival mode battle, you have to try last as long as you can as you defeat one enemy wave after another.

At first, you and your cooperative player are equipped with just shotguns, but the enemies are also lightly armed. They can spawn from any direction, so it pays for you to stick together.

You can run through the multilevel homes or the lower and upper levels of the airplane fuselage. You can snipe at enemies from above, but it’s easy for them to come up the stairs and take you out.

If you survive one round, you get points to spend on replenishing your ammunition or upgrading to a better gun, such as a submachine gun. If you make it another round, you can replenish your grenades. And if you survive further, you can get air support such as a Delta squad to watch your back.

The variety of enemies gets harder and harder. One wave includes attack dogs who have bombs strapped to their backs. You can take out the barking dog before they get you, but then you have to get away from it or face the bomb explosion.

I survived long enough to meet a heavily armored Juggernaut soldier. I could have taken him out with an air strike or something similar, but he just gunned me down instead. This map also serves as the site for a new multiplayer map battle.

Overall, the content drop is a good one, but it would have been nice to have another multiplayer map so that the players won’t run out of content before the next drop arrives in April.