Viral video smash hit “KONY 2012” has done what the likes of Susan Boyle, Lady Gaga, and Rebecca Black could not: amass more than 100 million video views in just six days.

Kony 2012, produced by non-profit Invisible Children, is a 30-minute, heart-wrenching documentary film designed to solicit donations and raise awareness for the arrest of Joseph Kony, a Ugandan rebel employing children as soldiers. 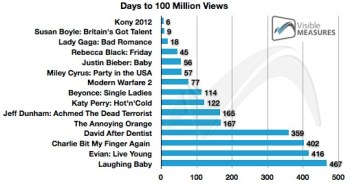 Posted to YouTube on the afternoon of Monday, March 5, the Kony video had racked up 112 million views from more than 750 clips on the web as of this morning, making it the fastest viral video campaign to surpass 100 million views, according to video analytics firm Visible Measures.

In light of the video’s instantaneous success (due in part to celebrity endorsements), Invisible Children, the San Diego-based not-for-profit organization behind the viral campaign, is facing scrutiny from critics who are questioning its accounting practices.

Monday, the Better Business Bureau issued a press release indicating that it had sent 18 letters over the course of six years to Invisible Children in an attempt to get the non-profit to cooperate with an official charity review. Those letters have gone unanswered, the Bureau said.

“I don’t understand their reluctance to provide basic information,” CEO of the BBB Wise Giving Alliance H. Art Taylor said in a statement. “The whole point of the effort is to shine the light of truth on a terrible atrocity, and yet they seem to be reluctant to turn that light on themselves. It’s really unfortunate, because their campaign has the potential to inspire and galvanize millions of young activists and future philanthropists.”

The Invisible Children founders consider themselves, above all else, moviemakers and storytellers, a message CEO Ben Keesey conveyed in a video response to critics.

“When we launched KONY 2012 our intention was to share the story of Joseph Kony with new people around the world, but in the process there’s been a lot of questions about us,” Keesey said in the video. “I understand why a lot of people are wondering is this just some slick, fly-by-night, slactivist thing, when actually it’s not at all.”

Keesey said the “program expenses” line item in the company’s financial statements represent the amount of money Invisible Children puts toward its causes. Program expenses in 2011 were 80.5 percent, according to the non-profit.

Financials aside, it’s impossible to argue with one obvious takeaway: Invisible Children has done a remarkable job at distributing the Kony 2012 campaign on the web. Only two other social video ad campaigns, according to Visible Measures, have ever topped 100 million views: Blendtec’s “Will It Blend” and Evian’s “Live Young.”