Tempted to purchase the Mass Effect Infiltrator mobile game to aid your campaign in Mass Effect 3? Don’t. The spin-off app for iPhone, iPad and iPod Touch feels more like a clumsy cash grab than an enjoyable extension of the Mass Effect universe. Instead of fighting the Reapers, you’re primarily fighting the controls.

Electronic Arts has shipped more than 3.5M units of its latest science fiction blockbuster Mass Effect 3 to retailers. The lengthy campaign is about gaining partners for a transgalactic alliance against the invading reapers, a nasty kind of alien machine race. Main character Commander Shepard collects war resources by completing campaign missions. The larger the military resources and the higher the “galactic readiness” score, the better the chances for a happy ending.

There are several side activities that connect to the main campaign in order to increase the galactic readiness rating. One way to become a little more ready is to participate in the co-operative multiplayer mode that is part of the Mass Effect 3 game. Another, much less entertaining approach, is to spend $6.99 for Mass Effect Infiltrator — and be prepared to shell out more money for unlocking the extra powers dearly needed to finish its nine stages. 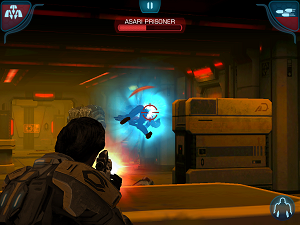 I like the idea of staying connected with the Mass Effect universe even when I’m away from my main gaming system. Infiltrator is a universal iOS app that runs on iPhone (3G and up), iPod Touch (3rd generation and up) and all iPad models. It’s a decent-looking third-person shooter with tight levels that are quite suitable for short play sessions on the go.

Infiltrator allows me to “upload” intel I’ve collected in its levels by defeating enemies to the Mass Effect 3 campaign associated with my EA Origin account. The system works nicely, although the boost is negligible; about 90 minutes worth of intel bumped my galactic readiness up by 3 percentage points.

The big problem with Infiltrator is that it focuses on the Mass Effect game mechanic least suited for touchscreen controls. It’s a watered-down version of the third-person shooter action that requires a lot of maneuvering from cover to cover and the selection of different weapons and special abilities. It’s so feebly executed that players might get an unfavorable perception of what the combat in the Mass Effect 3 main game might be like (which, for the record, has great controls and is a blast to play).

Developer Iron Monkey Studios — creators of the acclaimed iOS version of Dead Space — tried to come up with a unique input system suitable for touchscreen controls. It’s somewhat serviceable, but lacks precision and can be quite irritating. On not so rare occasions I accidentally left cover, had trouble targeting, lost track of my surroundings due to bad camera angles — or simply died because the app crashed in the middle of action. I played the game on a first generation iPad and pity the brave souls who dare to tackle the finicky touch and swipe controls on the smaller iPhone screen. 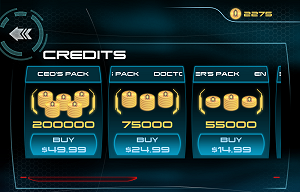 The combat difficulty seems to be tuned for encouraging additional in-app purchases. I can unlock and upgrade weapons, special abilities and armor in Infiltrator’s store. The required credits flow slowly for average gamers who don’t have the time and nerve to replay every level to achieve a perfect score. Alternatively, I could buy some extra credits for as little as $1.99 (up to $49.99 for the ‘CEO’s pack’ worth 200,000 credits. EA chief executive John Riccitiello must be smiling). I find this practice acceptable in free-to-play games, but in a $6.99 app it’s much harder to swallow.

Mass Effect Infiltrator has decent 3D graphics, but little else to show. The small impact of uploading intel and the promise of gaining another war asset for Mass Effect 3 are not worth that much time or money. I’d much rather play another campaign side mission or bump up my galactic readiness by completing a 20 minute round of Mass Effect 3 multiplayer.

Infiltrator disappoints, but the concept of connecting smaller spin-off games with a major release has promise. In the smartphone space, EA should focus on game genres that are better suited for touchscreen controls. The Mass Effect universe could be the foundation for a great strategy or a pure role-playing game, for example. But let’s leave the cover-based shooting to gaming devices that have such amenities as physical knobs and buttons.