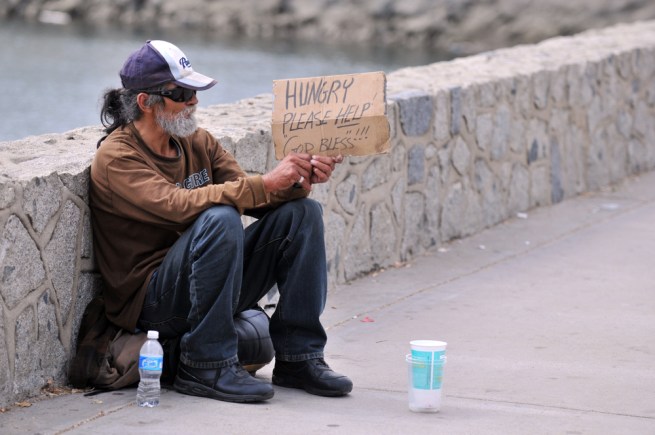 A marketing firm is catching heat from the tech community for a project that temporarily turned the city of Austin, Texas’ homeless population into mobile 4G hotspots during the South by Southwest (SxSW) Interactive event this weekend.

Essentially, BBH Labs outfitted 13 volunteers from a homeless shelter with a mobile wireless hotspot, business cards, and a t-shirt with their name on it that reads “I’m (Name), a 4G Hotspot”. Event attendees are encouraged to donate money if they gain access to the network.

When I first heard about this practice I was a bit mortified. The idea of turning homeless people into wireless hotspots seemed far too similar to a dancing monkey performing at a royal party for the amusement of the guests. This notion was amplified after reading reactionary stories on a number of websites, including Wired. But having explored the official site for the Homeless Hotspots Project, I have a much different opinion.

The Homeless Hotspot efforts at SxSW aren’t actually all that sinister at all. The Mobile Wi-Fi isn’t being provided courtesy of Sprint, with big company logos all over the person’s clothing. The only person that stands to benefit from this project is the homeless people.

On the site, BBH Labs explains that the project is modeled after the practice of giving homeless people jobs selling news papers on the side of the road. Since “dead tree” newspapers are going the way of the dinosaur and news organizations are moving online, it leaves one less way for the homeless population to make a few bucks legitimately — without having to sit on the side of the road with a cardboard sign and a tin can asking for your change. All proceeds from the project go directly to the person providing the Wi-Fi.

As digital media proliferates, these newspapers face increased pressure. Our hope is to create a modern version of this successful model, offering homeless individuals an opportunity to sell a digital service instead of a material commodity. SxSW Interactive attendees can pay what they like to access 4G networks carried by our homeless collaborators. This service is intended to deliver on the demand for better transit connectivity during the conference.

Also worth noting is that this isn’t the first time BBH has implemented its Homeless Hotspot efforts. The project originally started in New York. The current efforts at SxSW were also done in partnership with Front Steps, a charity dedicated to ending homelessness in Austin.

Regardless of how much good the project might be for the individuals involved, some posts just didn’t like the idea of the homeless providing Wi-Fi for rich drunk people at a big party. For instance, Wired’s Tim Carmody described the practice as “something out of a darkly satirical science-fiction dystopia.”

He’s certainly not wrong. But, that description is more telling of our own society than it is about allowing homeless people to better themselves during a busy time in a big city.