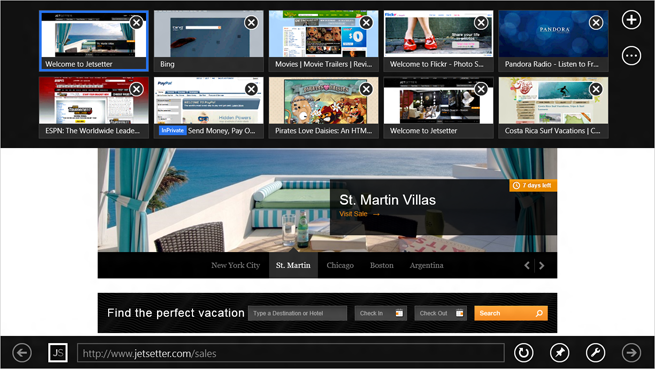 Microsoft announced improvements to its touch-friendly Internet Explorer 10 browser in a blog post today, to be used on the upcoming Windows 8 operating system.

Both Mozilla and Google have declared that they are preparing Metro-style versions of their browsers for Windows 8. But Internet Explorer is a unique case. Microsoft seems to at least partially understand that Internet Explorer blows, and it wants to make big improvements for IE10 in Windows 8, which will be released later this year. The company writes:

“IE10 is designed to make website interaction fast and fluid for touch as well as for heavy mouse and keyboard use,” IE Group Program Manager Rob Mauceri wrote. “With IE10, websites participate in the Metro style experience in Windows 8, including the Start screen, charms, snap, and more. IE10 also provides the best protection from malicious software on the web while providing real control over your online privacy.”

The company is set on two main goals: make the browsing experience fast and make it safe. Whether you’re touching Windows 8 with your fingers or using a mouse, Microsoft believes it has designed it to run smoothly and help guide you with tabs, a navigation bar, and site pinning that lets you create shortcuts on the Windows Start screen.

On the safety side, the company said it will incorporate IE9 tools such as “SmartScreen, XSS filtering, Application Reputation, InPrivate browsing, Tracking Protection, and hang detection and recovery.” There’s also a new feature for IE10 called “Enhanced Protected Mode” that isolates a website in a single tab, so others aren’t affected. You can also do private browsing per tab as well.

Check out more screens of Internet Explorer 10 in Windows 8 below: