PayPal is set to announce a major new payments service tomorrow. According to a GigaOm report, it plans to introduce a dongle that will compete with Square and Intuit’s GoPayment product.

This would be another move by PayPal to expand from online transactions into real-world payments. But if tomorrow’s announcement is anything like the point-of-service offering PayPal rolled out recently to get people to use PayPal for in-store purchases, I’m not overly optimistic.

I tried out PayPal’s point-of-sale offering recently at the local Home Depot in San Mateo, and I was far from impressed. Instead of swiping a credit or debit card to pay, you can enter your phone number and a PIN to pay with your PayPal account. PayPal’s goal is to introduce the service at a number of big box retailers, but for now, the service is being tested at several Home Depot stores. 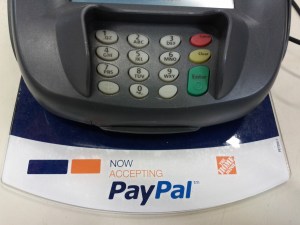 Above: PayPal signage on POS terminal 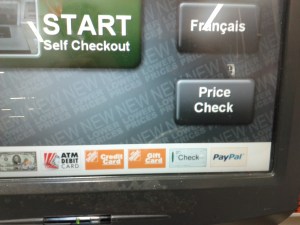 Above: PayPal logo on self-checkout machine 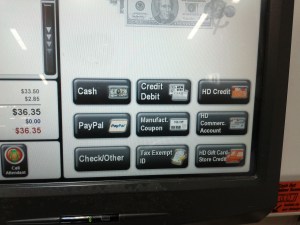 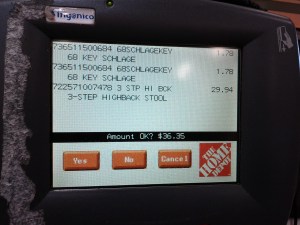 Above: Reviewing purchase on POS terminal 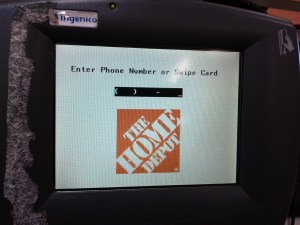 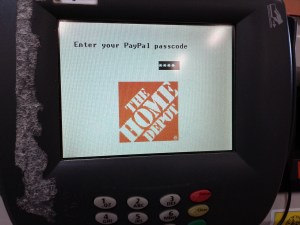 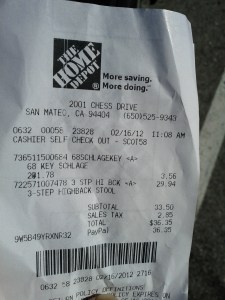 Entering my phone number and PIN took longer than it takes to swipe a credit card. This is something that the many companies going after the retail payments space don’t understand: Swiping a credit card is not a problem for people. The credit card companies make their money by taking a piece of every transaction. So they’ve made it super easy to do so.

I remember going to Kmart with my parents as a kid. Back then, the cashier had to pull out a booklet of credit card numbers that had been reported stolen and compare it against the card. Then there was the big ka chunck-ka chunck of the imprinter. And then my dad had to sign. Now, all of that has been automated and many transactions under $25 don’t require signatures.

PayPal offers a special card that can be used to swipe instead.

PayPal always tries to get me to use my checking account. I never, ever want to do that. I want to use my Starwood American Express card, because I get points for hotel stays and a 30-day interest free loan. I understand that PayPal makes more money if they get to hit my checking account, but that’s not my problem. Some consumers who keep little money in their checking account, could get hit with bounced check fees if they forget to enter a PayPal transaction.

There’s also a security concern: a 4-digit PIN combined with a well known identifier (a phone number) is significantly less secure than a PIN combined with a 15- or 16-digit credit card number that no one knows. Because people frequently use birthdays and other data available through social networking sites, it would be possible to guess the PIN.

Add in PayPal’s lousy customer service reputation and it’s unlikely I’d use this service beyond test purposes. I know that if I have a problem or a billing dispute with American Express, they will take care of it. I have zero confidence in PayPal’s customer service. PayPal’s POS product also doesn’t seem to fall within consumer protection laws that apply to credit cards.

The key to success in payments is having a strong value proposition for both merchants and consumers. Square and American Express have done that.

PayPal has been subsidizing acceptance of PayPal by merchants as it seeks to gain adoption. If it is successful in getting consumers to adopt the technology, it could lead to lower fees in the long term for merchants. But for consumers, I see no meaningful value proposition.