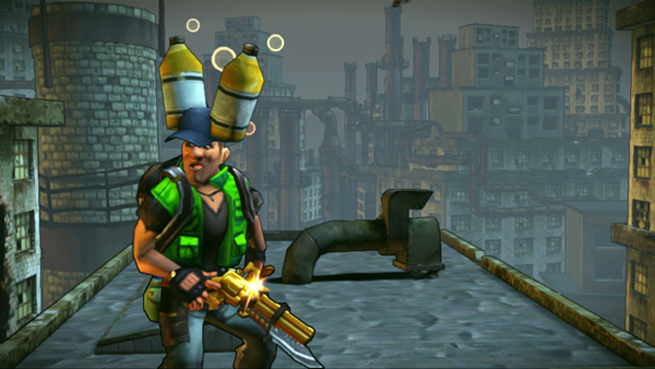 Sometimes you’ve got to give it up for truth in advertising. A Shooter for 2 Bucks. Snakes on a Plane. I MAED A GAME W1TH Z0MBIES 1N IT!!!1. And now, Shoot Many Robots, a turn-based, card-battle platformer that takes major cues from Myst.

OK, no. You shoot many robots. As a redneck named Pickles.

This marks Massachusetts-based Demiurge Studios’ first release as a headline developer, but they’ve quietly delivered subcontracted maps, assets, and ports to the big boys for years. You’ll find BioShock, Borderlands, Rock Band, and Mass Effect for PC on their resume. Maybe that’s why Shoot Many Robots doesn’t generally come across as a fledgling title from a no-name developer…even though technically, it is.

And while yet another side-scrolling, four-player co-op shooter doesn’t exactly stretch the imagination, Demiurge injected enough character to give its entry in the genre a bit more bite. At least, until a few limitations and balancing issues de-fang the experience slightly.

Let us not understate the appeal of a party game with freeze guns, flame guns, ray guns, and gun guns. You star as P. Walter Tugnut, an ornery son-of-a-biscuit on a quest for vengeance after the robot apocalypse totals his beloved pickup. Here endeth the plot. Off you go to shoot many robots, and in this endeavor, Shoot Many Robots gleefully serves as your white-trash enabler, hurling armies of mechanical fodder directly into your line of fire.

And man, with a full four-player crew blazing away, things go from zero to super-insanity fast. Enemy numbers scale for the number of players (a two-player local co-op is also available), so no worries about running out of targets. Graphically, it’s appropriately cartoony with great depth of field. Six locations, each with two robot-killin’ maps and one challenge room, progressively unlock as you earn stars for — yep — killin’ robots. The levels aren’t complex but sport a decent length and a few hidden areas with goody chests. Power-ups (including a critical-hit boost and super-speed) drop with satisfying regularity.

If, on the other hand, euthanizing armies of soulless chainsaw fiends with assault rifles while indulging in the healing power of beer isn’t your bag…well, I really can’t help you. Perhaps no one can. 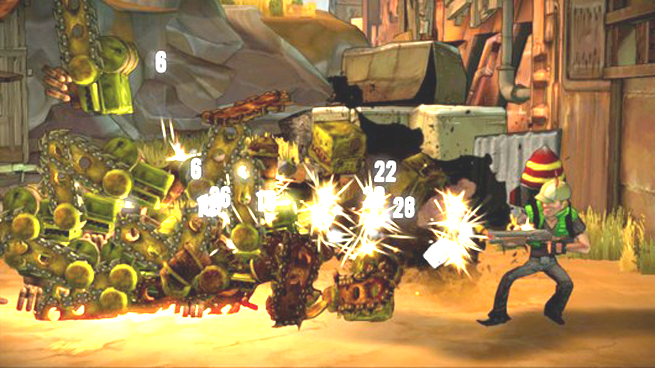 Not to detract from the whole “shoot robots” thing, but Shoot’s expansive upgrade system is the real star, fueling both your rampage and the game’s twisted redneck humor.

It’s fairly easy to scoop up bolts (the in-game currency) and build out the hillbilly of your dreams via two weapon slots (standard and heavy) and three gear slots (head, shirt, pants). Hundreds of items unlock at a steady clip. Cherry-pick the stats and attributes you want to boost, ignore others, or mix-n-match. Throw on some bat wings (Swoop Rating: 6), a propeller beanie (Gravity -30%), an infant carrier (+1 Baby), a beer hat (+2 Beers), or any number of goony options, all with descriptions (“It’s amazing what you can accomplish with duct tape and bad ideas”) you’ll actually read. When’s the last time that happened?

Your ultimate arsenal of ultimate destiny gets the same love and attention. Slow rate of fire with high penetration? Done. Eighteen-bullet burst fire? Done. Catastrophic gnome launcher? Done and done. You’ll find something that appeals, and a good team of Tugnuts can — and will — feature four wildly different approaches without anyone feeling underpowered. At least, not after a few runs through a challenge room to level up and rake in the bolts.

The system does hit one sour note: microtransactions. You can choose to shell out real-world cash for weapons in lieu of unlocking them normally. As shortcuts go, it feels too much like a cheat, particularly considering how fast you can level up in multiplayer alongside a high-rank amigo.

Unfortunately, Shoot Many Robots suffers from the flaws of its genre. It’s fun to rank up alongside your trigger-happy friends and buy better guns, stat-boosting pants, jetpacks, tutus, etc. It’s less fun to rumble through the robocalypse on your own. Don’t have a good Internet connection? Didn’t buy a Gold membership on Xbox Live? Hate other people in general and 12-year-old online gamers in particular? Then you’ve got a problem. It feels staggeringly like you’re missing out on the real game without a few more P. Walter Tugnuts out there shootin’ and drinkin’ beer and shootin’.

Minus the camaraderie and competition, more flaws stand out. Checkpoint placement feels odd at times — before a major engagement but not after — and you won’t get two-thirds of the way through a rather short campaign before levels are recycled wholesale, right down to the end boss. A lot of love went into the look and flavor of this game, but these design slipups are exactly what I’d predict from a developer more used to dealing in high-quality pieces than cohesive wholes. 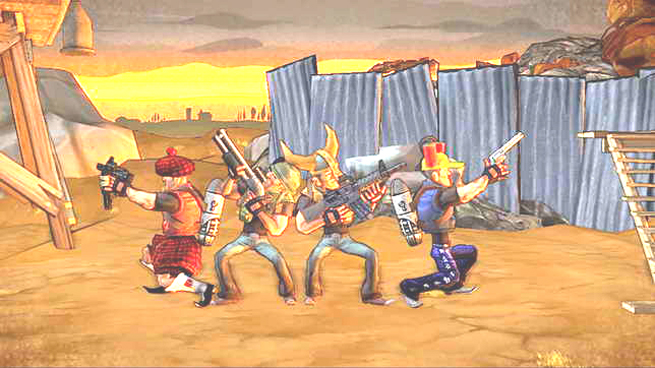 Right around the time you hit level 6 (out of 50), you gain access to weaponry that turns you into a southern-fried god of death. By level 25, no power in the universe can stop you…and that’s before three of your equally ranked friends join in.

I found my perfect recipe pretty early on: an infinite-use flamethrower that decimates all comers paired with Fluffy’s Revenge superbombs (toted around in a pet carrier with “R.I.P.” hearts scrawled on the side). Then I decked out in low-gravity, high-hang-time astronaut gear. Game over. Mostly, I just stood in place and hosed any threats trundling at me. If a robo-horde suddenly pounced, I simply took to the air. Boss battles lasted about 15 seconds…roughly the same time it took to deploy and detonate three Fluffies.

That broke things a bit. I dropped out of the game’s economy. I stopped visiting the store (until more powerful flamethrowers and Fluffies unlocked). I didn’t experiment with other weapons and gear once my winning formula was in place. Unless an insane number of robots suddenly charged from all directions in increasingly aggressive waves — not uncommon — my action-shooter became a tower-defense game. I found a spot to hunker down in and pressed X to win.

Difficulty does scale (particularly as you inch toward the level cap and in multiplayer) but plateaus onto Easy Street fairly often. A solo run through the early levels with a maxed-out redneck is simplicity itself. Jumping into an unbalanced co-op party also throws the challenge out of whack, though often with hysterical results.

Demiurge’s gonzo approach to the old formula and a ton of customization options make for a cool jump-in-and-play-with-friends arcade game. It ain’t deep, but if you’re looking for complexity out of something called “Shoot Many Robots,” odds are you’d also try to buy a slightly used continent off eBay. Regrettably, you’ve got to hit a narrow window of conditions to enjoy shooting all those robots over the long term. Too-powerful weapons acquired too soon can also neuter the challenge well before you get a party started.

That said, as team-carnage games go, you’ll get some mileage out of this one. Grab a few of your drinkin’ buddies, and have yourselves a fun (and cheap) night of gratuitous hillbilly firepower and richly deserved robo-death. Preferably with your beer goggles on. Score: 78/100

Shoot Many Robots released on March 13, 2012, on the PlayStation Network and on March 14, 2012, on Xbox Live. An Xbox Live download code was provided by the publisher for the purpose of this review.