Call of Duty Elite is turning out to be a highly engaging social network for hardcore fans of Call of Duty: Modern Warfare 3. The online social network now has more than 670,000 clans, or groups of players who team up in multiplayer battles, according to Activision Blizzard’s Beachhead Studio leader Chacko Sonny (pictured center).

In an interview at the Game Developers Conference, Sonny said the numbers show that clan operations have become really big, as each clan can have up to 100 members. The clans are one of the primary ways to make the game “sticky,” since players who battle together for a long time are more likely to keep returning to the blockbuster game, which has sold an estimated 25 million copies and is the best-selling video game of all time.

With the clans, leaders can create uniforms with the group’s own national flag and other details so that each member of the clan plays with the same uniform in battle.

Activision hasn’t shared the latest numbers for Call of Duty Elite. In February, the company said that 7 million players had signed up to become Elite subscribers since the game launched in November. Of those, 1.5 million had signed up to pay $49.99 a year to become premium members of Elite. That entitles members to get all of the downloadable content for free. The revenue from such subscriptions made a small contribution to Activision Blizzard’s digital revenue in 2011, which amounted to $1.6 billion. Full told, Elite will have 24 content drops in 2012. Content drops 4-6 are available today.

Call of Duty Elite was controversial when it was first proposed because fans feared that Activision would begin charging money for things such as multiplayer play that were previously free. The service also had a rocky launch. But now that it’s up and running, Activision believes gamers are coming around.

Heller said that clans were so popular that when Activision turned on the feature, 40 clans were formed in the first 30 seconds. That means users were constantly refreshing the page for forming clans as they awaited the new feature.

Sonny said the service — which had a rocky start as the number of users overwhelmed Activision’s servers — is back on track and widely available to users now.

Clans can earn achievements and grow in levels over time. They can grow up to level 50, a number which shows when a user looks up a clan’s status. In one challenge, Activision had clans play the Domination version of the Modern Warfare 3 multiplayer game over three hours. At the end of it, they ranked the top six players. More than 25,000 clans with 200,000 players participated in the challenge.

Activision had to spin up a large live operations team to monitor the clans for possible cheating, Heller said.

“The clan operations are a way for players and teams of all capabilities to get in there and compete for bragging rights,” Sonny said. 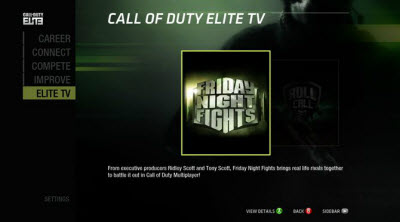 Jamie Berger (pictured top left), vice president of digital at Activision, said the company will soon start “100K days,” a monthly event where it gives away $100,000 worth of prizes to winners of competitions and events. The prizes will range from simple Modern Warfare 3 swag such as a hoodie to ATVs, Jeeps, or scuba diving trips.

“This is the kind of stuff that engages the really serious player,” 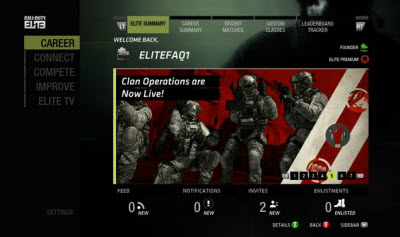 Activision is also rolling out more Elite TV shows on Call of Duty Elite on the consoles. Previously, it was a technical challenge to serve a lot of videos to fans. Map videos show players how to tackle each map. The videos feature things like celebrity grudge matches of TV stars Michelle Rodriguez vs. iJustine. A new season of Friday Night Fights, a challenge show directed by Ridley Scott, is in the works. Other shows debuting are Noob Tube and Cocked Hammers.

The new Call of Duty Elite mobile app for Android and iOS has been downloaded more than 2 million times, Berger said. With that app, players can set up their own weapons kits and save them so that they can use them in actual multiplayer games. Tablets support and a version 1.2 update are on the way.

“We tailored the app to the strengths of the mobile platform,” Sonny said. “And then we will apply the lesson to the tablet in the future.”

The company has plans to release a magazine called Drop Zone to describe the downloadable content. Several Activision studios — Infinity Ward, Sledgehammer Games, and Raven Software — are all working on new content, Berger said. Altogether, Activision will release 24 content drops this year for Call of Duty DLC, up from a planned 20.

The next major version of Elite will come with the next game, which will presumably be Call of Duty: Black Ops 2. 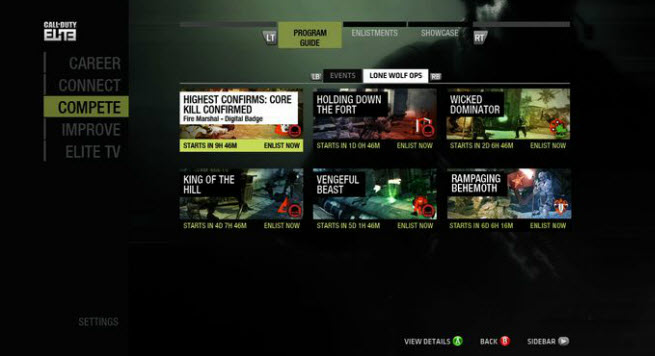