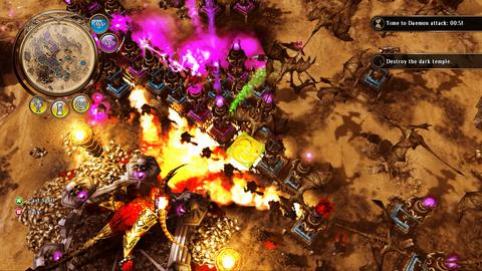 I’ll be honest with you. I did not finish Defenders of Ardania for this review — and I don’t intend to. Nothing short of a loaded bazooka to my head will make me go back to this ugly, boring mess of a tower-defense strategy game.

Um…well…let’s see. Some (just some) of the voice acting is adequate. And the “on paper” ideas (tower defense with some real-time-strategy elements, such as the ability to create and send out troops to attack the enemy, spells and upgrades for your entire team, and hero units) behind Ardania are well-intentioned. Oh, and the game didn’t blow up my Xbox 360.

Otherwise, I’ve got nothing. Seriously.

The first few levels were incredibly painful to play — and those were the tutorials! The narrator has a tendency to start the match without any warning, giving your computer opponent a big head start. (Perhaps they’re secretly in cahoots?) You might be sitting there, awaiting your next lesson, when you suddenly notice the enemy has built towers right up to your doorstep before you’ve even laid down your first one. The narrator will also try to teach you a new feature while the real-time action is in full swing; I’ve had to restart a few missions just because I missed some instructions.

Sometimes, Ardania will show you something but neglect to tell you that it won’t work yet. Early on, for example, the game reveals that you can have your troops attack opposing towers (instead of passing them by on their way to the ultimate goal: the enemy home base) by setting a rally point. I placed flag after flag, and I couldn’t get my guys to take a single swing. I gave up on this particular strategy, chalking it up to a bug, and then learned later that only certain units can attack buildings — ones I don’t unlock until further into the campaign. Why the game even mentioned this feature before anyone could take advantage of it is beyond me. 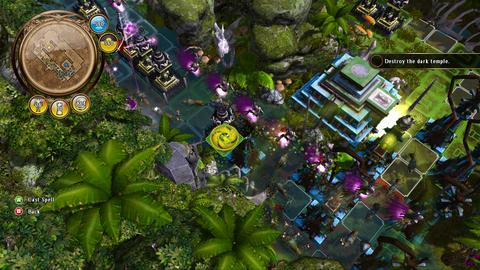 Unlike most tower-defense games, in Ardania, you can spend money on offensive units that vary in power, health, armor, and skills (such as the aforementioned ability to attack structures, which the tutorial likes to keep a secret, apparently). These lemmings will mindlessly march to your foe’s base, getting picked off by enemy towers along the way.

This is not a new concept in the genre: PlayStation Network’s Comet Crash did this as well (much, much better, mind you). Unfortunately, in order to win, you have to destroy the opposing castle with your troops, and because both sides are building up powerful defensive structures, very few will actually make it through. Oh, you will eventually get there if you really put some time and effort into each match. I did, for the sake of this review. And I hated nearly every minute of it.

The problems begin, again, with the tutorials. In the very first level, the advisor never gives you a good indication of which units you should be sending out, so you have to experiment with them. That in itself is not a big deal, until you learn that really only one of your early army types can even survive the gauntlet: your “tank,” a high-health, high-armor, self-healing cleric. Most others will die along the way.

While a few non-clerics may sneak in here and there, you’re pretty much throwing your money away with them. It took me a while to realize that for this first stage, I should’ve been spamming out nothing but these clerics, who just happen to be the slowest moving and least offensively powerful within my army. Before that realization, it was a soul-sucking stalemate as both sides were spewing forth endless streams of cannon fodder that rarely reached the opposite castle. After I switched to an all-tank offense, I was still struggling to keep my brain out of a comatose state as I watched troops crawl across the map to slowly chip away at the enemy base like a handful of termites attempting to take down a giant redwood.

Even later, when I had more strategies to work with, such as more unit types (including fliers), it was always an excruciatingly long and drawn-out process to win any match. 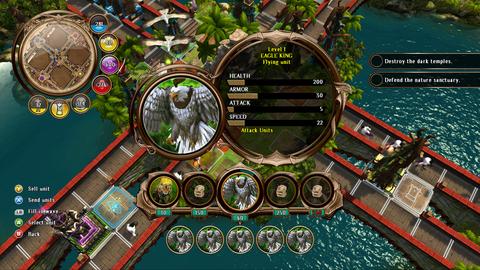 It’s very difficult to tell your own towers apart from the enemy’s, even when both are sitting right next to each other. You can figure out a few tricks to help you out, but they’re very impractical (put your cursor over a tower because only your own will show a circle indicating the attack range…or constantly switch views for health bars to only reveal your own). More obvious team colors would have helped.

And when buying a new building, a window showing its stats pops up and obscures a huge portion of the playing field beneath it, including smaller range circles. In other words, you can’t even see exactly how far some of these towers can shoot until after you’ve built them.

Did the developers even try playing their own game?

I’ve reviewed around 800 games in my lifetime, and rarely has one so completely obliterated my will to play it through. Yes, I’ve reviewed some legendary duds — Mortal Kombat Advance (Game Boy Advance) and Superman 64 (Nintendo 64) come to mind — but in twisted way, I enjoyed playing those in that “so bad they’re good” sort of way.

Defenders of Ardania is so bad, it’s bad — and I don’t make that statement lightly. It’s filled with idiotic design decisions and gameplay imbalance. I had an utterly miserable time with it, and I never, ever want to touch it again. You can find plenty of infinitely better options, like the aforementioned Comet Crash, Defense Grid: The Awakening (Xbox Live Arcade, PC), Dungeon Defenders (multiple platforms), or sitting on your ass and doing absolutely nothing.

But hey, I’ll try to be an objective reviewer here for every type of gamer imaginable. So for those of you who enjoy “games that don’t blow up my Xbox 360,” these handful of points are for you. Score: 13/100

Defenders of Ardania was released on March 14, 2012 for the Xbox 360 and PC and was previously released for iOS. An Xbox Live Arcade download code was provided by the publisher for the purpose of this review.