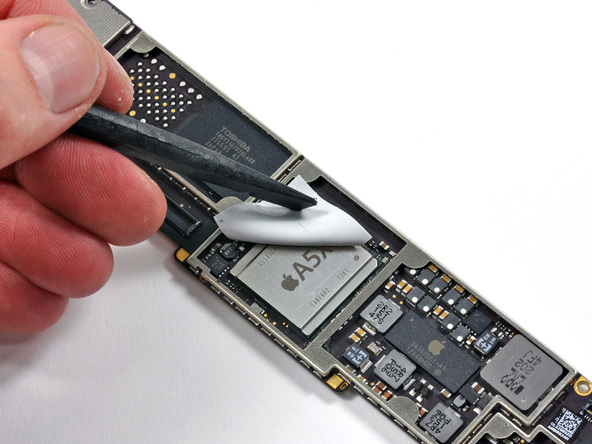 Those glorious geeks at iFixit have gotten their hands on Apple’s new iPad, and are currently in the midst of tearing it apart to reveal its lovely innards.

So far, the site has confirmed that the new iPad is rocking a Samsung LCD, judging by its model number (a sign that we could see similarly high-res screens in Samsung’s devices soon).

Don’t be surprised if you have trouble accessing iFixit right now though, as the site’s live teardown is also tearing apart its servers. On Twitter, iFixit said: “We have never received anywhere close to this much traffic before; we’re adding servers like crazy.”

Thus far, the site has managed to take off the iPad’s screen and has found its way into the tablet’s logic board, revealing the Apple A5X processor above. Just like its predecessors, the A5X was manufactured by Samsung. The site also found that the chip was manufactured in the first week of 2012.

This is where teardowns get really interesting, because we may learn something new from one of the many chips on the logic board.

Other notable chips include the Broadcom BCM4330, which handles Wi-Fi and Bluetooth, the Qualcomm RTR8600 for LTE, and the Broadcom BCM5973 I/O controller (which Apple has used previously in A4 and A5 devices).

We’ll be updating this post as iFixit’s teardown continues, check back for updates.