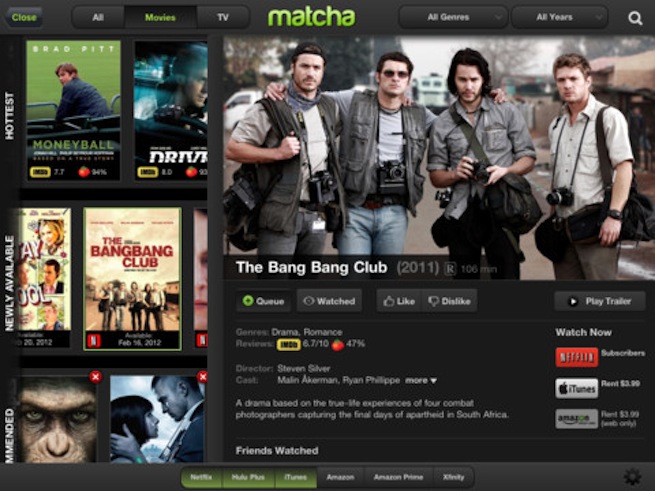 Streaming video content on Netflix, Hulu, Amazon Prime and several others have significantly grown over the past year, leaving people with a wide selection to choose from. Unfortunately, you have to sift through each service to find what’s available.

The experience can prove rather daunting if you’re simply searching something to watch while vegging on the couch, which is something Matcha.tv intends change.

Matcha’s new iPad app, which officially launched earlier this week, aggregates a list of content from several of the most popular streaming services, including Netflix, Hulu, Amazon Prime, and Comcast’s Xfinity TV. Additionally, Matcha’s app collects available video rentals/purchases on both iTunes and Amazon as well. And while I’d like to avoid the standard comparison with the old printed TV Guide publication, that’s pretty much exactly what the app is — a tablet-optimized TV Guide for streaming content.

“There really isn’t anything that can easily help you find what to watch now, and what to watch next across all these streaming services,” Matcha.tv co-founder and CEO Guy Piekarz said in an interview with VentureBeat. He added that the new iPad app is the perfect companion for people that watch a lot of streaming video.

Pulling up the app initially reveals a user interface very similar to Netflix’s iPad and Android apps. The screen is locked in horizontal mode, which is probably the best orientation for viewing the several rows of TV show and movie box art. There are a total of five rows that organized according to “hottest” overall videos being watched by all users, newly available videos, a recommended section of videos (based on a variety of factors), a friends video watching activity section, and finally, your personal queue.

Unlike Netflix, the UI doesn’t devote specific rows to a particular genre. Instead, you can select a genre at the top of the screen, which will alter what gets shown in the rows below (except for your queue). You can also alter what’s displayed in the rows by toggling each of the video streaming services on and off using the buttons located along the bottom of the screen. So, if you never plan on purchasing Amazon Prime, you won’t be forced to see the service’s content library within your viewing guide.

There’s a lot to like about this app if you’re subscribed to a ton of streaming services, such as the ability to use a unified queue of content. This is a nice feature for saving videos from Xfinity and Amazon Prime, both of which don’t have an easily accessed queue on their own. Videos previously saved on Netflix will automatically show up in Matcha’s queue, but unfortunately stuff from Hulu Plus does not. (I suspect this has something to do with Hulu being the only service to automatically add new videos to your queue as they become available.)

Another nice thing Matcha offers is the ability to read information from imdb, check out reviews from Rotten Tomatoes, and watch trailers when you select a video. This is far from an original set of features, but it is a helpful addition. It would be nice if Matcha could eventually pull in information like this using fan-generated Wikia sites, such as those for Star Trek, which could add even more to the viewing experience.

I really only had a few small issues with the Matcha iPad app. The first of these is that some of the video selections are unnecessarily treated as separate videos. For example, Netflix treats old Doctor Who episodes as separate movies because they aren’t packaged as part of a DVD box set. Amazon Prime, on the other hand, recognizes all the episodes as part of an entire series. Obviously Netflix and Amazon aren’t going to rectify this, so its up to Matcha to determine a solution. The other problem I have is that Matcha’s app doesn’t have the same capabilities of a smart remote control. I don’t enjoy juggling three remotes and an iPad while watching something on TV. It would be nice if I could just open up the Matcha app on my tablet and relax.

Fortunately, Piekarz sympathized with my plight and told me that the company is looking into remote control functionality as a possible feature in the future. Also in the pipeline are apps for other mobile devices, he said.

Founded in Sept. 2010, the startup has raise an initial $300,000 in angel funding to date. Matcha faces competition from Fav.tv, Clickr, AOL TV’s iPad app, and a handful of others.