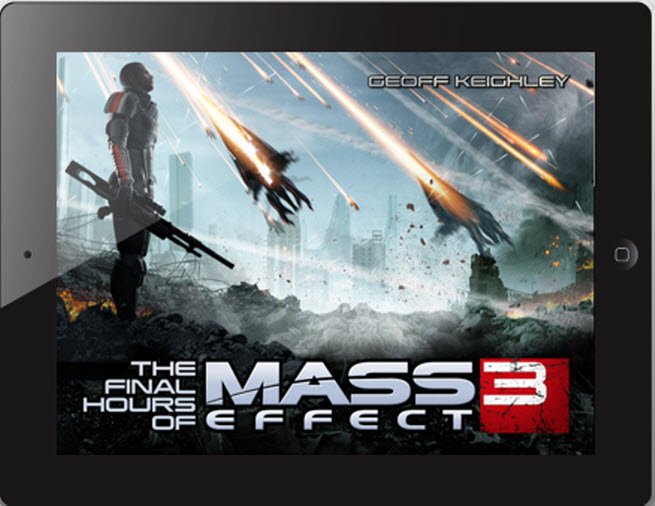 Spike TV GTTV game TV show host Geoff Keighley has released an iPad app dubbed The Final Hours of Mass Effect 3. In it, he discloses a number of revelations about the making of the blockbuster game, which debuted on March 6.

Mass Effect 3, from Electronic Arts/BioWare is the first major blockbuster release of 2012 in video games. EA revealed that it shipped 3.5 million copies of the game to retailers in its first week.

Keighley’s revelations were released today with the app. Among them: the original Mass Effect emerged from a project with the code name SFX. Bioware wanted to create its own galaxy, much like George Lucas did in Star Wars. The Final Hours is the second app that Keighley has done (the first was on Portal 2) and it is part of his long-running series of web stories on the making of major blockbuster titles.

The $2.99 app has more than 15,000 words, 20 minutes of video, and interactive photos. It has unseen concept art and a mini-game. Keighley had access to the BioWare team, and he profiles them intimately. Project director Casey Hudson originally pitched BioWare founders Ray Muzyka and Greg Zeschuk at a lunch in 2003.

“There were no details yet about the main character of the story, but Hudson did have one thing figured out: He wanted the doctors to commit to making a trilogy of games in this unknown and unnamed universe,” Keighley wrote. “Yes, he wanted BioWare to make its own Star Wars. So taken aback by Hudson’s bold ambition, Muzyka burned his tongue on some hot soup at lunch.”

The idea morphed. No longer did it include an Xbox Live trading system. Nor did it have a storyline where the human race was enslaved. BioWare ditched a lot of efforts, including a bunch of levels on a volcanic planet named Caleston.

Beware of spoilers. The app talks about the ending of the trilogy, which has a number of fans up in arms.