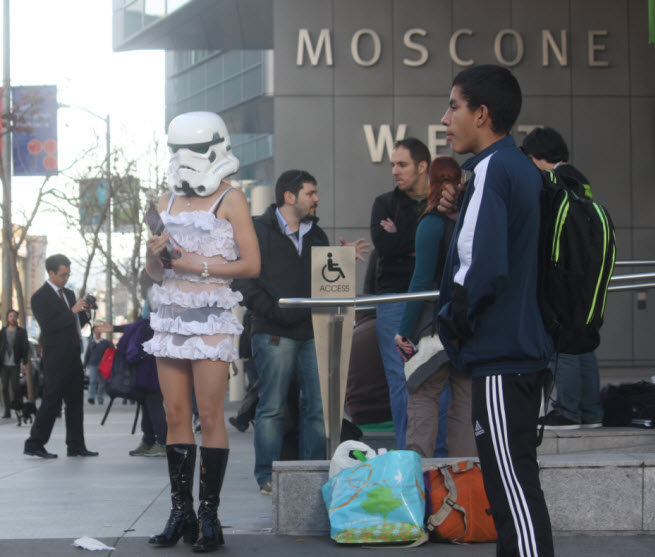 Too often, I flit from one conference to another like a wayward butterfly, trying to catch up with all the news. But the Game Developers Conference is one of my favorite events of the year because it places such a high value on creativity in the game industry. It is fitting to dwell upon it and to figure out what this year’s conference in San Francisco, which ended Friday March 9, was all about.

It’s presumptuous to say that I could spot every trend, given my limited experience of the five-day event with more than 400 sessions. But here are some things I noticed.

This year, the Game Developers Conference (GDC) drew more than 22,500 attendees, up 17 percent from a year ago. That’s much better than the heart of the economic downturn in 2009, when attendance fell from 18,000 the year before to 17,000. The attendance boom is no surprise given the growth of the industry in 2011, which saw two mega-IPOs for Nexon and Zynga. Billions of dollars are being tossed at the game geeks who were once ostracized for having too many pimples. Last year, investments in game companies grew 96 percent to $2 billion in 152 deals. Game acquisitions grew 160 percent to $3.4 billion, according to Digi-Capital.

John Schappert, chief operating officer of Zynga, disagrees with those who say we’re in the Dark Ages of video games. In his GDC speech, he argued that we are living through another golden age, when play, the essential activity behind gaming, will reach a billion people. Such optimism is contagious in an age full of growth in the online, social, and mobile sectors, where new companies are sprouting every week. There are, Schappert said, “more ways to play, more players, more opportunities.”

The impact of this was visible on sidewalks clogged with recruitment hawkers on the sidewalks (pictured), and in the clogged career hall and the plentiful (and occasionally offensive) parties that took over all of the bars of San Francisco. There were huge numbers of indie-game developers. Against that backdrop, Schappert’s speech was believable.

In keeping with our first trend, Double Fine Productions’ Tim Schafer has drawn huge attention to crowdfunding through Kickstarter by raising nearly $3 million from game fans for a new project. Schafer plans to make an adventure game with the money, as long as he doesn’t squander it all first. Kickstarter’s Cindy Au told GDC attendees how to get crowdfunding for their own projects.

Not everyone is benefiting from the Gold Rush. In the midst of the GDC, the NPD Group reported that core U.S. video game sales fell 20 percent in February, following a 34 percent drop in January. 3D artists in particular seemed to be losing their jobs at core console game companies, while 2D artists were in demand at the casual social game companies and mobile game firms. That may change as social and mobile games grow up. But it could be hard for some people in the industry to jump from a faltering horse to a faster one. A misstep can be costly. I ran into an acquaintance who was laid off from THQ, a struggling core game maker that is expanding into the new game industry. THQ has $47 million in cash, but its market cap has fallen to $41 million.

This year, Apple crashed the party again. Last year, Nintendo’s chief executive Satoru Iwata gave a GDC speech at the very same time that Apple launched its Apple 2. Guess which company got overshadowed? This year, there were no GDC major keynote speeches, so Apple had the spotlight to itself as it launched the new iPad down the street. The reaction from game developers was positive. Not only is this a threat to gaming portables such as the ill-timed PlayStation Vita, it is also a threat to the consoles themselves. Accidental or not, Apple is winning over game developers and gamers alike. “The center of gravity has clearly shifted to mobile,” wrote Raph Koster, a seasoned game developer.

Free-to-play, where users play for free and pay real money for virtual goods, is taking over as the business model for the whole game industry. Virtual goods revenues are at $9 billion and are the fastest-growing part of the $49 billion game industry. PopCap Games’ Giordano Bruno Contestabile discussed the lessons of moving Bejeweled Blitz to a free-to-play model at the GDC.

“The social/free-to-play model is clearly not just winning but dominant,” wrote Koster. But you have to do it ethically, without milking your users. 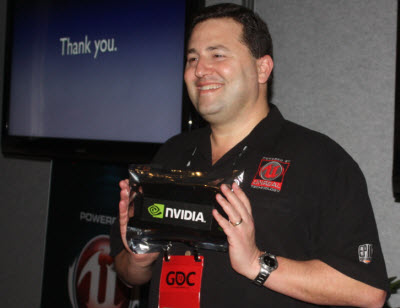 Browser-based game graphics have been mostly lame for a long time. That’s because it’s technically hard to run sophisticated 3D game animation through a browser without doing a big download first. But Adobe’s upcoming Flash 11.2 will enable Flash-based browser games to tap 3D graphics hardware in a computer as needed. Even Epic Games’ Unreal Engine 3 will work inside the new Flash, as announced by Epic’s Mark Rein (pictured). Other 3D-capable technologies such as Google’s Native Client for Chrome browsers and Unity Technologies Unity 3D engine are also coming into their own.

Game jams are creative gatherings where creators work furiously to create a game in a short time and share it with the crowd. These events have been around forever, but they’re starting to yield interesting fruit. Last year, Double Fine Productions held a game jam that led to the creation of Sesame Street: Once Upon a Monster. It’s no surprise that just about everyone held a game jam at this year’s conference, and one session headed by Austin Montville of Tagged zeroed in on how to do it.

The GDC continued its waltz through yesteryear as top game developers reminisced about the games that inspired them. John Romero credited Pac-Man for inspiring the corridor warfare of Doom and Quake, while Sid Meier lauded Dani Bunten’s The Seven Cities of Gold for inspiring Civilization, and Will Wright was inspired by Pinball Construction Set before he built SimCity (which also got a second life). Romero spent $200 a month playing Pac-Man.

Ed Logg talked about creating Gauntlet. That was relevant because the classic games of the golden age of video games has returned, only this time to the platform of smartphones and tablets. Those devices are the ideal vessels for the creativity of designers like Logg, who has joined Innovative Leisure, a collection of Atari veterans and youngsters intent on making well-designed mobile games. 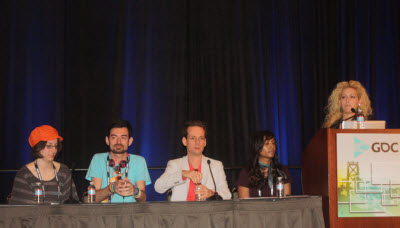 The wrong end of a gun has inspired much of the emotion in video games. But a session on making love, not war, in video games proved to be popular with both male and female game developers. Moderated by Jane McGonigal (pictured at podium) and Jane Pinckard, the session focused on “how designing for love can change the world.” Michael Molinari, an indie game maker, talked about how he and Chelsea Howe created a game called The End of Us about two comets that fall in love and then deal with the death of one of them. Making love games is not a trend, given 5,000 years of violent games have preceded this panel. But the organizers hope it will be a turning point.

Big Fish Games joined the casino game wars as it acquired Self Aware Games, a maker of mobile casino titles. Big game companies are positioning themselves for the day when online gambling is legalized across the country, and casino games can become real gambling platforms. The trouble with casino games is that they aren’t necessarily that creative, and game developers get bored making them. Alisa Chumachenko, chief executive of Russian game publisher Game Insight, sighed with frustration at the mere mention of revival of casino games.

It’s one thing to be inspired by another’s work, but another thing to copy it. Even as creativity is celebrated among the indie developers making apps, its evil nemesis copycatting has become worse than ever in mobile and social games. Even the New York Times weighed in on the subject, which we discussed with Zynga chief executive Mark Pincus in early February. (Yes, indeed, they must have copied our story!).

The best way to counter copycats is to double down on creativity. Martin Rae, president of the Academy of Interactive Arts and Sciences, said, “There are very original ideas, and sometimes the best ideas are iterations on the old ideas. Sometimes people are just too early with their ideas. People iterate on that idea and do something better.”

Waiting for next gen?

Lots of people wanted to hear the latest rumors about the next-generation video game consoles. There were plenty of those to go around, including one that suggested the next Xbox would have no disk drive and would be entirely online. Alas, the confirmations just aren’t coming yet.

Microsoft said today it won’t talk about the next Xbox at E3. Sony previously said that it would not talk about a PlayStation 4 at E3, leaving Nintendo alone to talk about the Wii U hardware at the big trade show.

Capcom senior vice president Christian Svensson told Gamasutra that the console makers should pay attention to how the game business has changed — with the responsiveness, quick turnaround on updates and launches, and easy distribution — thanks to smartphones, tablets and online gaming.