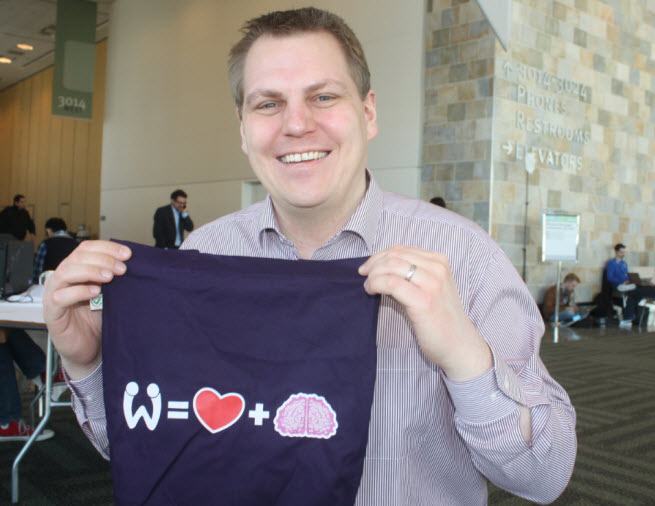 The company was founded in 2009 by Jens Begemann (pictured above), Philipp Moeser, and Patrick Paulisch with the goal of making games for everyone, including the mass market and not just gaming die hards. Since then, it has only published six of them: Bubble Island, Brain Buddies, Monster World, Happy Hospital, Magic Land, and Diamond Dash. With that portfolio, the developer grew its monthly active users by 185 percent in 2011.

Now Wooga has raised $24 million in venture capital and has grown to more than 150 employees.  The company now faces a number of strategic decisions, such as doubling down on Facebook or spreading out to platforms such as Google+ or Zynga.com. We caught up with Begemann at the recent Game Developers Conference in San Francisco. Here’s a transcript of our interview. 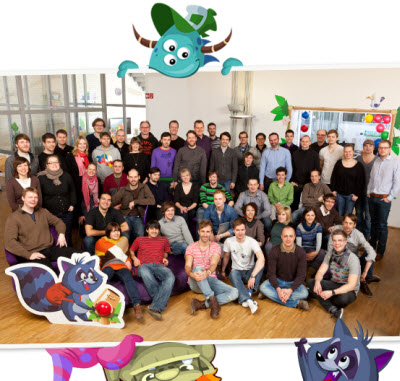 GamesBeat: What did you talk about at GDC?

Jens Begemann: The talk was basically [about what we learned] from the first three years of Wooga. We were asked by the organizers here, because we now have nearly 50 million monthly active users. They wanted to know, “Where did you come from? How did this happen? Why this growth?”

We’re not doing anything magical. We’re just doing work. But I tried to sum up seven lessons that we’ve learned over the last few years. One of those is to focus on making our games very engaging in such a way that people come back often. We emphasize that instead of virality.

I think some other companies have been complaining that the virality of Facebook is not what it used to be. I think for us what has worked is focusing on engagement and making sure people come back. Every new user…you need to treat them like a small gold nugget — try to keep them. If you keep all of these new users, you’ve made a gold bar.

GamesBeat: So how does something like Diamond Dash do that?

Begemann: In Diamond Dash, it’s many, many things that are in the small details that you don’t see. We spent months on fine-tuning. When you hit a group of diamonds, how long does it take for the new gems to fall down? How many points do you get? How difficult is it to get this in-the-row bonus when the whole game world is on fire?

Basically, if you know the theory of flow, the game has to be challenging but at the same time can’t become too difficult. We ensure that people — from the very first moment on but also if they have played for a very long period of time — always feel challenged. They always have the feeling that they are under control, and they can create their own experience. It’s kind of similar to a triple-A title but obviously much more simple. It’s really about all these small little improvements that make sure people come back over long periods of time.

And then, of course — one element is using the social elements of competition in a good way. If you compete with your friends for a gold medal, that’s more interesting than playing alone or playing with strangers.

GamesBeat: How does that game monetize? Are you buying energy to play longer?

Begemann: Yeah, you can buy energy to play longer. You can also buy boosts. If you want to beat your friends, you can buy some extra boosts and get a bigger chance to beat them. All of those things you can also can be earned inside the game, so there’s nothing that’s exclusive through paying money. But, like in core games, you pay for having that faster speed-up.

GamesBeat: Do you think that one monetizes well relative to other social games?

Begemann: In terms of absolute numbers, we’re very happy, because the game is so big: 18 million monthly active users. Even if revenue per user is not so huge, overall that’s big. But yes, in terms of revenue per user, it obviously doesn’t monetize as well as Kixeye’s games. I think they have a very different model. Much less users, much more revenue per user. For us it’s truly mass market. That has also been our philosophy since the beginning. First, reach a huge audience, and then build monetization on top of that, instead of the other way around.

GamesBeat: From observing that game, it seems so short to me that it’s really hard to monetize. I suppose you can find people who really just don’t want to stop. [Laughs] Normally I just stop when I run out of energy.

Begemann: Diamond Dash is just a minute. [You can visualize it like this:] It’s like a bag of chips, where each chip is just one bite, but if you don’t pay attention, you finish the whole bag.

Diamond Dash is similar. Each round is just one minute, but some people really play for lots and lots of time. People who play with their friends enjoy it more. Many groups of people play in their offices when they’re on their lunch breaks. Everybody during this half an hour plays Diamond Dash at the same time. This group of 10 people or so, they send free lives to each other. It’s a Facebook gifting feature, so they can play for longer. Some of them also spend money on buying power-ups. But a game like Diamond Dash is definitely super-mass market.

GamesBeat: Zynga has started running a lot of ads in Words With Friends. Is that an opportunity for you guys as well, especially in these games that don’t monetize automatically?

Begemann: We don’t reveal detailed numbers. But overall, I think people underestimate it. Because of these huge user numbers, it’s possible to monetize quite well. And regarding advertising, I think that’s a potential growth opportunity for the future, but at the moment we’re very focused on doing a small number of things. There are tons of opportunities that we have, but for us, we really focus on growing on Facebook, growing our user base there, and improving our monetization there.

The second big focus is mobile. Advertising would be a good, additional growth opportunity, but at the moment, it’s too much of a distraction for us. It would take away the focus from our key growth.

GamesBeat: You guys have become a strong company. There are a handful of strong companies out there, and they’re starting to pursue different strategies. Kabam’s is going onto six different platforms, while you guys are sticking with Facebook. You have moved onto Google+. Do you know how many platforms you want to be on?

Begemann: Our focus, really clearly, is Facebook, and on mobile it’s iOS [iPhone, iPad, iPod Touch]. We like being on a small number of platforms. We have a great relationship with Facebook, and we like the iOS platform a lot. And over time, especially on mobile obviously, there will be more. I think it’s quite natural to think of Android and potentially also Windows Phone — I think that’s quite natural, but on the PC, we’re really happy with Facebook. Other companies may go to other places, but for us, it’s the right platform to focus on.