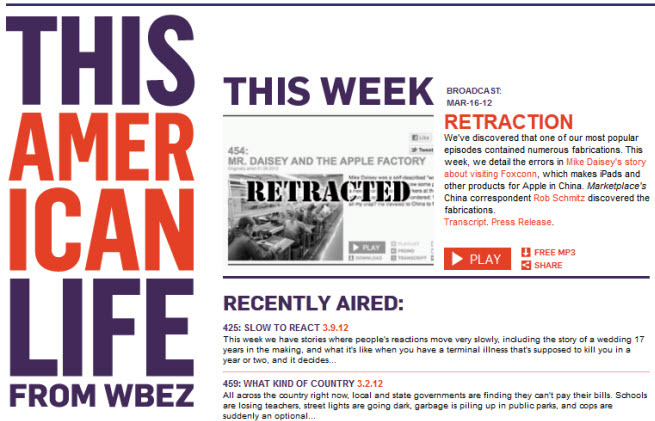 The radio show This American Life aired its hour-long retraction show today that admitted there were “numerous fabrications” in a story it aired in January by Mike Daisey, a theatrical performer who said he had documented the harsh working conditions of Foxconn employees working in Chinese factories that make Apple’s iPad and other products.

We posted the story about the controversy along with the transcript of the show. In a blog post, show host Ira Glass wrote that he could no longer vouch for the truth in the earlier radio broadcast and that “Daisey lied to me and This American Life producer Brian Reed” about details of the show.

But it really is worth listening to in audio form. Here’s the link for the show, entitled, Retraction. Glass’s voice shakes when he says, “I should say, I am not happy to have to come to you and tell you something that we presented on the radio as factual is not factual.” And the show plays haunting music in the background as Daisey’s translator, Cathy Lee, tracked down by Marketplace China correspondent Rob Schmitz, disputes Daisey’s over-dramatization and downright fabrications of encounters with Chinese workers. In a confrontation about the lies with Glass and Schmitz, Daisey’s answers are evasive.

“Rob Schmitz: So you lied about that. That wasn’t what you saw (about talking to workers who were poisoned by hexane).

Daisey replied: I wouldn’t express it that way.

Rob Schmitz: How would you express it?

Daisey: I would say that I wanted to tell a story that captured the totality of my trip. So when I was building the scene of that meeting. I wanted to have the voice of this thing that had been happening that everyone has been talking about.

Ira Glass: So you didn’t meet any worker who’d been poisoned by hexane?

Glass and Schmitz confront Daisey head-on in the recorded conversation over a number of things. They pick at him and he says, “I don’t know if this is a wise thing to be doing, like, telling you it into this microphone, in this conversation.”

And Glass lashed out, “I have such a weird mix of feelings about this, because I simultaneously feel terrible, for you, and also, I feel lied to. And also I stuck my neck out for you. You know I feel like, I feel like, like I vouched for you. With our audience. Based on your word.”

Later on, Daisey came back for a second recorded interview and said that the heart of the fictionalized story was true, but the mistake he made was airing it as journalism, rather than theater, on This American Life.

Glass concluded the show with some real facts about China’s Foxconn factories in an interview with New York Times writer Charles Duhigg, who along with David Barboza wrote an investigative series about the Apple supply chain. Apple hasn’t commented on the show and its retraction.