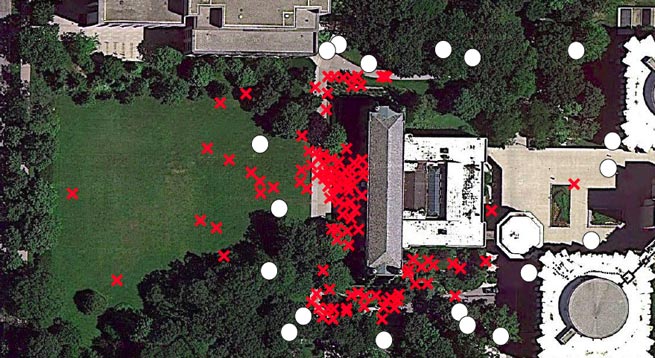 Smartphones have turned us into an army of accidental data collectors, checking in at locations, taking photos, recording audio, even gauging network speeds wherever we go. This rich data can be used for research, but because people are creatures of habit, there are sometimes gaping blind spots.

“Flickr has thousands of photos of the front of the Lincoln Memorial. But who takes a picture of the back? Very few people,” said Fabian Bustamante, associate professor at Northwestern University, in a statement. He proposes “soft controlling” people into gathering information needed for research by using games or social networking apps. The apps would nudge people into completing a task at a specific location, then reward them with points or incentives.

Bustamante and his group at Northwestern University whipped up a location-based, augmented-reality Android game called Ghost Hunter to test the theory with students. In the game, a player wanders around her neighborhood looking for ghosts and other monsters, and when the ghouls are in range, the app switches to a live view with an overlay of cross-hairs. The player shoots the ghost and a photo of the location is uploaded.

Just playing the game was enough of an incentive to get participants to wander off their beaten-track, according to graduate student John P. Rula. Rula was the lead author of a paper on the project.

Full sets of crowdsourced photos can be used to do neat things like create 3D models of landmarks or buildings. Another possible use for this technology is tracking noise pollution. Mobile phones and tablets already have built-in microphones that can be used to measure ambient noise, but what would make you whip out your iPhone and hit a button right as the N train rumbles into the station? How about a reward such as the chance to win $5 at Starbucks, or something less tangible like killing a brains-hungry zombie for points?

There are already plenty of apps that reward you for “checking in” at a location, including Foursquare and Gowalla. Soft control functions could be easily integrated into existing apps with about 25 lines of additional code, according to the paper.

Researchers are quick to point out the idea isn’t to trick people into sharing information; all participants would be notified and their data anonymized when uploaded.

The idea may sound a bit odd at first — who would agree to be “soft controlled”? But many people are actually eager to become citizen scientists, as evidenced by the popularity of the SetiQuest Explorer app, which allows anyone to help monitor radio signals in space to help search for extraterrestrial life.