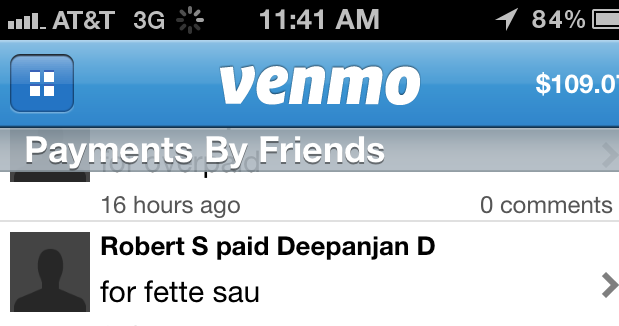 Venmo just sent me a penny. I sent it back of course. VentureBeat is an ethical publication before all else.

The New York based social payment service announced today that it was taking off the beta label after launching more than two years ago. Why put on the big boy pants now?

“We started as just two guys. Now we’re a team of more than twenty on pace to process more than $250 million this year. We felt we had crafted a really great experience and it was time to go public,” Venmo co-founders Andrew Kortina and Iqram Magdon-Ismail told VentureBeat during a phone interview this afternoon.

Unlike its competitor, Dwolla, Venmo charges no fees at all to its users. “We’re more focused on the social experience right now. People are using Venmo to split the bill at restaurants, pay friends back for cabs, even just to joke with one another. The majority of transactions on Venmo are shared with the public,” said the co-founders.

That’s an interesting statistic. At a recent panel I hosted on Big Data, venture capitalists and entrepreneurs all agreed that the golden opportunity in the Big Data space is getting access to consumers purchasing habits.

Venmo says it’s going to stay focused on building a consumer-facing social network for now, no ads or revenue streams necessary. Eventually they hope to create a product for merchants that will tap into that social graph, and build interesting products around mobile payments and loyalty. Merchants would pay a fee.

The company raised a silent round from its current investors (Accel, RRE, Greycroft, and Lerer Ventures) back in August of last year, helping to fund its growth, but it won’t comment on the size beyond describing it as a Series A.

“Our users Venmo each other for dinners, rent, concert tickets, birthday drinks, and sometimes just for laughs,” said the co-founders. “That wasn’t how we expected the product to be used, but its something we believe can be really powerful.” Nothing says smart startup like understanding when your product has uses you never imagined, and pivoting to that strength.

The app introduced a new feature last week that allows users to connect Venmo directly with their bank accounts. I signed up and was able to find a number of friends using the service, plus an $8.00 balance that we have no clue about. It’s like we found a bunch of change behind the digital couch cushions!