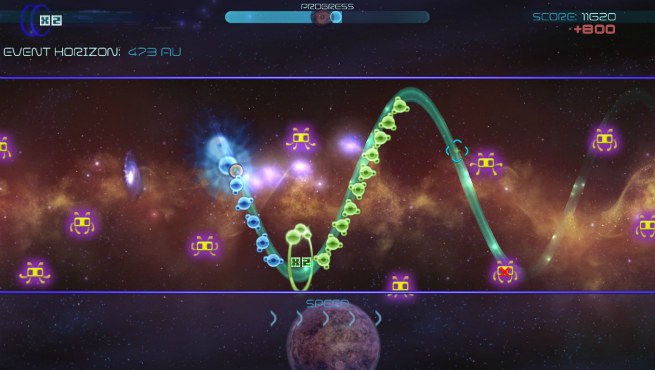 Our solar system is being consumed by a singularity and it’s your job to save it — not with bullets, magic spells, or superpowers, but with a wave of light transmitted through space. This is the premise of Waveform, a side-scrolling action game from independent Canadian developer Eden Industries.

Waveform is the brainchild of Ryan Vandendyck, a full-time programmer at Next Level Games in Vancouver, who worked on the project in his spare time. Influenced by titles like Auditorium on PC and Art Style: Orbient on WiiWare, his goal was to create a game based on a mathematical principle that was minimal in design yet visually appealing and fun to play. So did he succeed?

It’s accessible, yet challenging
Waveform is a game that can be played with a single mouse click. By dragging your mouse up or down, left or right, you manipulate a traveling sine wave’s amplitude and wavelength. This allows you to line it up with collectible colored gems. Gathering these gems increases the “health” of your wave and boosts your score. It’s a simple concept that anyone can easily grasp.

However, don’t let the title’s simplicity fool you; restoring light to a dying galaxy is not an easy task. There are many dangers in outer space, including dark matter, asteroids, and the cute-but-deadly space squids of Venus. Each planet you visit introduces a new game mechanic that can either help or hinder your progress. One world might be filled with space mines that explode when you get too close, while another may have wormholes that safely zap you across dangerous areas. Even in the later levels there’s always something new to master, which helps keep the gameplay fresh. 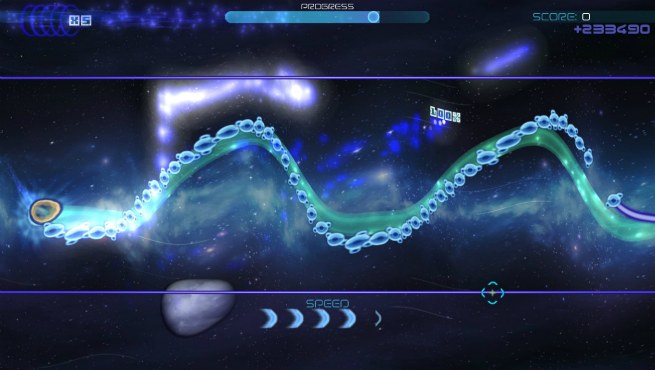 There’s a surprising amount of content
Waveform has over 100 levels spread out across 11 worlds. Completing them opens up New Game + mode, which features re-mastered versions of each level. There are also bonus levels to discover, Deep Space mode — 11 endless, randomly-generated scenarios with high-score leaderboards — and Steam achievements. The amount of content is impressive for a small indie title. Eden Industries has plans to support the game post launch as well through an in-game editor that will be offered as free downloadable content, giving players the ability to create and share their own levels.

The retro soundtrack
As a child of the ‘80s, I liked how Waveform’s soundtrack brings back warm and fuzzy memories of bowling alley arcade rooms and a lot of spent quarters. Composed by Next Level Games audio designer Scott McFadyen, the electronic tunes start off at a slow pace, making your trip through the cosmos an almost relaxing and meditative experience. However, the tempo picks up whenever you’re confronted by the singularity. Suddenly, the level becomes a mad dash as you attempt to guide the wave safely past obstacles while collecting gems and avoiding certain oblivion at the same time. Eden Industries claims the audio dynamically adapts with the pace of the game, and while I didn’t quite notice this feature while I played, the music is certainly one of the title’s high points. 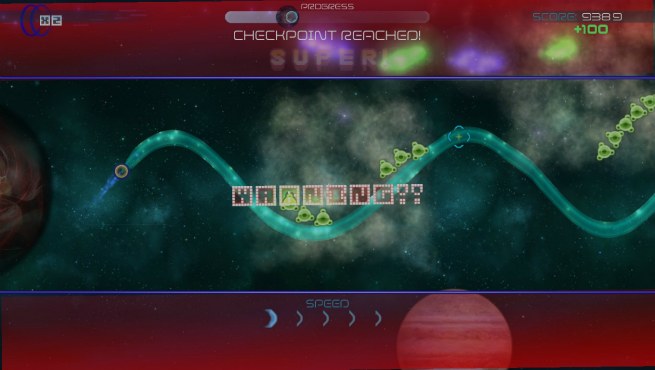 It’s not on mobile platforms (yet)
The only regret I had while playing Waveform was that it wasn’t on my smartphone. The game’s simple controls seem perfectly suited for a mobile device’s touchscreen. A Kickstarter attempt to raise the funds needed to port the title was unsuccessful, although Vandendyck tells VentureBeat he hasn’t given up on the idea.

CONCLUSION
For now, Waveform is being offered on Steam for $6.99 (discounted to $5.99 for the first week) and is a welcome addition to the digital distribution service’s growing roster of indie games. Its colorful visuals and retro-symphonic soundtrack are easy on the eyes and ears, while its minimalistic design ensures gamers of all skill levels can immediately jump in and enjoy saving the galaxy.

Waveform was released on March 20, 2012 on Steam. A download code was provided by the developer for the purpose of this review.