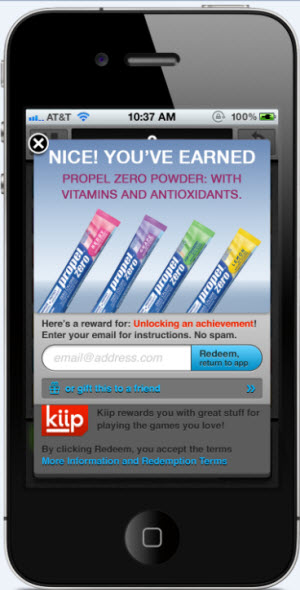 Kiip has gained a large following of game developers who are connecting its real-world rewards network to mobile-game achievements. When you hit a big milestone in a game, Kiip will offer you a reward such as a Starbucks coupon.

Now Kiip is expanding this service beyond games to fitness apps. The move will help make achievements in non-gaming applications more meaningful and help to raise engagement for the apps.

The reward system is still the same for either games or fitness apps, said Brian Wong, chief executive of San Francisco-based Kiip, in an interview with VentureBeat. Kiip will offer rewards to users when they have a “moment” of achievement within the fitness apps.

“We are finally billing ourselves as a true rewards layer,” Wong said. “In this case, we are trying to harness the achievement moments that already exist in fitness and tying rewards to them.”

For instance, if you log your run for the day in MapMyRun, you can get a reward from PepsiCo’s Propel Zero brand. The same will be true for achievement moments in apps such as Nexercise, LoloFit, and Gym-Pact. Pepsi will mail a Propel zero package to you.

This initiative marks the first step in Kiip’s strategy to become a true “rewards layer” for all mobile activity. Kiip has partnered with PepsiCo’s Propel Zero brand to offer rewards of their zero-calorie nutrient enhanced water beverage mix packets to casual fitness enthusiasts who log a workout within popular fitness apps such as MapMyRun, Nexercise, LoloFit and Gym-Pact.

Currently, Kiip is giving out five rewards a second across 120 apps with 30 million users. Most of those are games.

“We have seen tremendous traction from our rewards network and top brands are buying into our reciprocity model,” Wong said. “Rewards are a natural way for brands to engage audiences and we originally built our network to accommodate audiences outside of gaming.”

PepsiCo urged Kiip to extend its system to fitness apps.

“Kiip has found a meaningful way to target consumers when they’re the most engaged, while providing an opportunity for our brand to reward them for being active,” said Jason Thalappillil, director of digital engagement, PepsiCo. “With Kiip integrated into the fitness and health category, we’re excited to surprise and delight users that are enhancing their lives through purposeful activity like fitness.”

Wong said that his company is not doing “gamification,” per se. That is the creation of game-like achievements for non-game activities or web sites. Companies such as Bunchball, Big Door and Badgeville do that. But Kiip is offering rewards on top of apps that are already gamified, such as the fitness apps.

“We’ve cracked the code on offering meaningful rewards that have value,” Wong said.

Kiip was founded in September 2010. It has 23 employees and has raised money from  Hummer Winblad Venture Partners, True Ventures, Verizon Ventures, and Crosslink Capital.