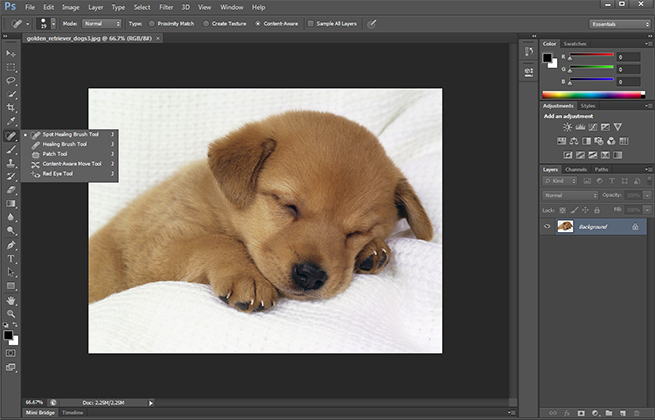 Adobe has just released Photoshop CS6 as a free downloadable beta for the first time, and the new version of its signature image-editing software is still great, based on some hands-on time we spent with it today.

Every new launch of Photoshop is an incremental upgrade of the last, so if you use CS5, this won’t be mind-blowing. But if you’re using CS3, for example, you’ll really love all the things you can do with CS6. It includes a darker default theme, new tools, a video editor, and more. It also boasts better performance with under-the-hood tweaks and the ability to use some computers’ graphics chips to make it run faster.

After downloading the 1.7 GB Windows (984 MB on Mac) installation file, I quickly installed and booted up CS6. Immediately, I noticed the theme has been changed to a dark gray interface by default. I rather like the color scheme, but if it’s not for you, you can make it darker or lighter with four different theme choices. The tweak helps match Photoshop with the themes of other Adobe products like Premiere Pro and After Effects.

On the left side, you’ll notice that Adobe has redesigned the menu icons slightly. Like CS5, you can hold down on a design tool and see other similar options pop up. On the right, the Properties panel now includes Adjustment layer and Mask settings in the same pane. Thankfully, the panels are no longer all uppercase lettering, so each option is more legible.

Testing out a few tools I use often, I noticed other changes as well. When you crop a picture, the program tries to guess what you’re cropping with its own rectangle. Then you move the sides of the rectangle to adjust the crop. As someone who crops a ton with photos, this actually was annoying and jarring. On the plus side, there is now a “background save” option that makes saving your work a faster process. After tapping “Control + S”, you can continue to work on other projects instead of waiting around for the save to finish. Another handy addition is the ability to search layers.

While we didn’t get a chance to play with it, there is also a new basic video editor included in CS6. This likely won’t be used by serious video editors but it’s nice to have another option for cutting videos. And if you’re just looking to do a minor edit and Photoshop is already open, why not? 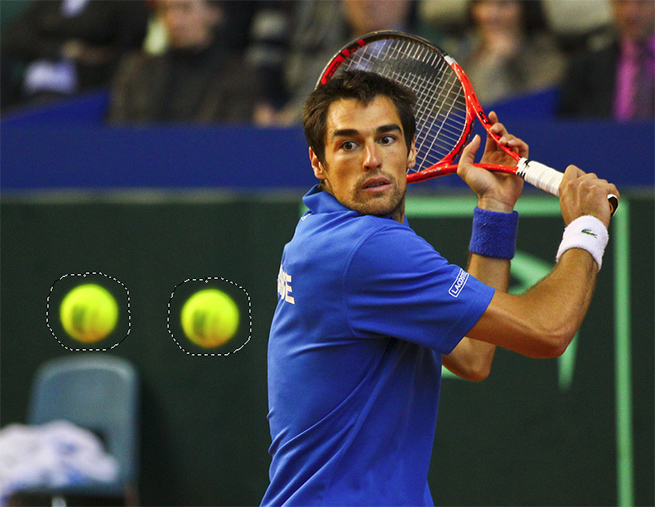 The addition we like most so far is Patch, which is similar to the Clone Stamp tool. It helps you select an area and copy it to another part of the photo, except it also blends the colors and patterns. This means you can move objects around the photo with less hassle. In the example above, I was able to duplicate an out-of-focus tennis ball and move it to a different position very easily.

There’s a new Adaptive Wide Angle filter that lets you straighten objects that are slightly curved because of using a fish-eye or wide-angle lens. There is also a Blur Gallery consisting of “Field Blur, Iris Blur, and Tilt-Shift” and a new Paste Lorem Ipsum feature, which can help you fill up dummy text as needed.

Overall, I like the feel and love the look of CS6. The 64-bit beta version runs noticeably faster than my 64-bit version of CS5 and the new tools will come in handy. The new version of crop was the only thing that really agitated me.

Photoshop CS6 will be available before the end of the “first half” of the year. It will cost $699 brand new, but there is an upgrade option for $199. You’ll also have the option to sign up for the Adobe Creative Cloud, which allows you to pay $50 each month for a full subscription to the Creative Suite.