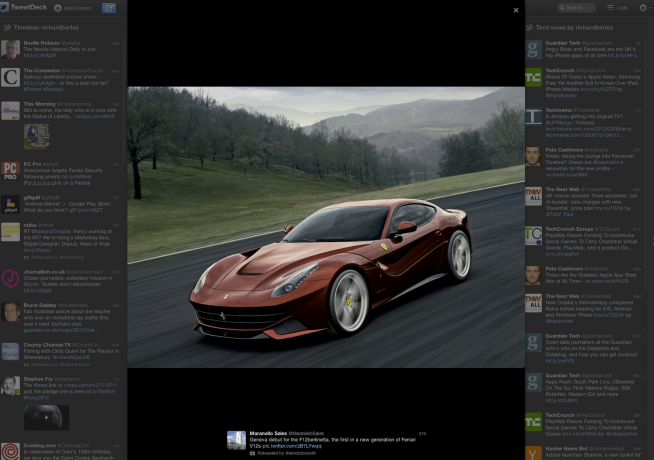 Twitter is showing a continued commitment to its popular desktop and web property TweetDeck with the release of an updated version that brings the “New-New Twitter” experience to Windows, Mac, and Chrome desktops.

The new 1.3 version brings with it a bevy of new features that will keep Twitter-holics glued to even more columns for even longer.

Most notably, the application includes two special columns allowing Twitter users to track follower activity in real time or keep up with all of the interactions related to their tweets.

TweetDeck, as a reminder, is the all-in-one, consumer-tailored social media dashboard fine-tuned for all types of Twitter stalking. It’s insanely popular with hyperactive Twitter users and journalists everywhere. The column-heavy social utility was acquired by Twitter in May 2011 for a reported $40 million. The tool continues to operate semi-independently — deeper Twitter hooks have been added, of course — and maintains its oringial name.

Existing TweetDeck users should appreciate today’s new “Activity” and “Interactions” columns; they carry over Activity tab features from the new-new Twitter.com December update over to the desktop. TweetDeck has also been visually enhanced with inline media previews, allowing users to view thumbnail previews of images and videos inside tweets.

Also new is the ability to (finally) manage Twitter lists and an option to “Edit & RT.” The latter change, for the uninitiated, is a pretty big deal for power Twitterers who simply can’t live without the “RT” in our retweets or the ability to edit and add text before firing off someone else’s 140-character missive.

We’ve done a little poking around, and we like what we see so far. It’s hard not to sit and stare as activity and interaction notifications pour in. We did notice, however, that the Mac application will hiccup at times if you’ve got quite a number of columns running.

The new version of TweetDeck comes just one day after the sixth anniversary of the first tweet. The information network has 140 million active users and sees more than 340 million tweets per day, Twitter said yesterday.