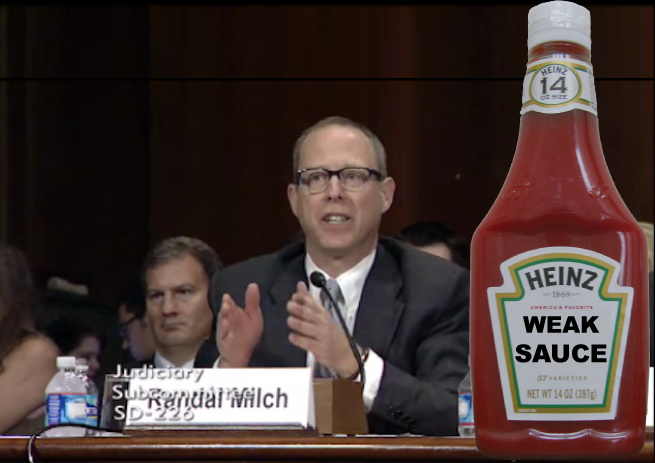 At a Senate judiciary committee hearing Wednesday, top executives from Verizon and Comcast reaffirmed their stance that consumers would benefit from the approval of a multibillion-dollar spectrum deal between the largest U.S. carrier and the country’s biggest cable television providers.

Last year Verizon agreed to spend $3.6 billion to obtain a portion of spectrum currently owned by SpectrumCo, a joint venture that consists of Comcast, Time Warner Cable Inc., Bright House Networks, and Cox Communications. That deal is currently under investigation by anti-trust regulators due to concerns that it could stifle competition and impact consumers negatively.

If approved, it would mean that the majority of wireless spectrum in the U.S. (which is used to transmit data via cell phones, GPS devices, radios, broadcast TV stations, and more) would belong to only two companies, Verizon and AT&T. And because this is the only nation-wide portion of the spectrum available for the next several years (if not longer), it also means there likely won’t be many new companies emerging as competitors in the wireless market.

“This deal seems to completely abandon the goals of the Telecom Act,” Senator Al Franken said, in reference to the Telecommunications Act of 1996. The Telecom Act attempted to make it easier for companies to enter into the business of communication services and expand competition.

Verizon’s argument for why the deal should be approved was pretty weak. During the hearing, Verizon Executive VP Randal Milch said his company would dutifully spend billions of dollars to build out SpectrumCo’s spectrum into a viable wireless network. This in turn would generate more money for Verizon by improving their overall wireless network and charging customers to use it.

But currently, Milch argued, the spectrum is “nothing” because the cable companies aren’t doing anything with it. Seriously, he actually said “right now we have nothing. It’s nothing.”

Franken was quick to respond to Milch’s comments, saying of course its something.. it’s a valuable addition to Verizon’s wireless business. “That’s the reason you want it. Right? OK.”

During the hearing, there were also questions about the cable companies’ intent for purchasing the spectrum six years ago.

“When Comcast and the other cable companies… bought spectrum at the FCC auction in 2006, there was hope that the cable companies would develop competing wireless service,” said Judiciary Committee Chairman Senator Herb Kohl. “Instead, these cable companies decided that it would not be economical to spend the resources to deploy this spectrum and enter the wireless market.

Kohl went on to point out that selling this spectrum to the largest wireless company is essentially the opposite of what regulators intended when they agreed to auction it off in 2006.

“Spectrum is government granted public airwaves to be used for the public interest,” Kohl said. “Is it in the public’s (best) interest to sell this spectrum to Verizon, the nation’s biggest wireless company, which will keep it out of the hands of any of the competitors.

“Wouldn’t it have at least been better to have a public auction for this spectrum?” he added.

Kohl also voiced the senate’s “disappointment” over comments made during Comcast shareholder meetings that suggested Comcast never intended to deploy a wireless service. The FCC has regulations against companies that purchase spectrum for its value or allow spectrum to be “warehoused” (intentionally not using purchased allotment of spectrum for strategic advantage over any competitors).

However, Comcast Executive Vice President David Cohen said wasn’t at all the case. In fact, Cohen claimed that SpectrumCo met with every single carrier about deploying a wireless network using its spectrum. The company’s original intent was to have an integrated communication service that included cable TV, broadband Internet, home telephone, and wireless, he said.

Despite concerns over an anti-trust investigation, Comcast determined that the best way to use its investment in the spectrum was to partner with Verizon. As the largest wireless company, Verizon could not only offer the most money, but it could also position itself as the best suited to deploy a wireless network using the spectrum.

Screenshot of Senate hearing via Senate.gov