In the past week, two high-profile mobile apps were effectively shut down and acquired — Hipster by Aol and Oink by Google. Both had big PR buildups, rave reviews from the tech press, and strong usage from the digerati.

What they did not get was traction beyond that, and the teams went on to be acqui-hired. Even apps that seemed to define new categories, such as GroupMe for group chat and Foursquare for check-in, have failed to gain popularity with the general public. GroupMe sold to Skype and Foursquare is shifting from the check-in model to the reviews/discovery space dominated by Yelp. Highlight, the latest digerati darling, drained batteries and fizzled at South by Southwest.

Why do even well-funded apps with successful founders fail — as happened to Peter Pham with Color, Kevin Rose with Oink, and many others? The reality is that even if you’re a proven entrepreneur, any consumer-facing product is hard — be it Web sites, movies, books, music, or toys. Consumers are fickle and have a ton of entertainment options; predicting what they want is incredibly challenging.

On the face of it, well-funded apps like Color and Oink should have had an easy time achieving app stardom. But in today’s world, independents have as much chance of taking off as pedigreed players. Having a large Twitter following and getting written up in tech blogs gives you only a small leg up — not a huge leap over the competition.

At CBS Interactive (where I work as chief technology officer), we offer a bunch of apps, including very popular ones like 60 Minutes and CNET. Our apps are an additional channel for branded, popular content, and even we sometimes struggle to get traction.

Making an app successful is a two-part problem. The first part is getting people to install the app. You do that by promoting it on your Web site, advertising  it, and promoting installs on Android via offer networks such as Tapjoy. (Disclosure: I am on the advisory board of Tapjoy). It’s also critical to nail the initial user experience so that the app gets good reviews.

But achieving a decent number of downloads is just the beginning. Apps need to be relevant to consumers’ lives so that users return to them regularly. They need fresh content, useful features, and reminders for users in the form of notifications and emails. The vast majority of apps, especially games, see their usage plummet not long after download. 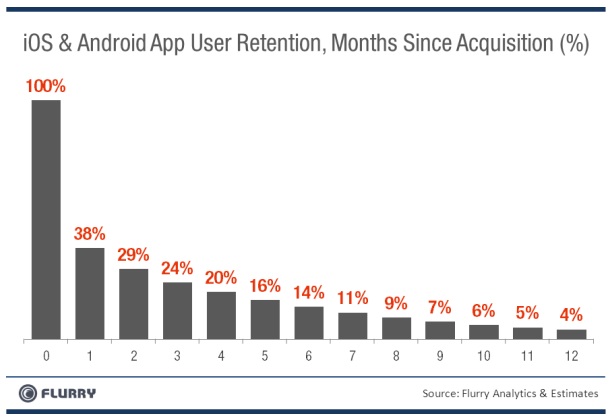 The iPhone and Android home screens have space for only 16 icons, and many of those spots are already taken by core features such as the phone, messaging, and map icons. Ask random, non-techie friends to pull out their phones, and chances are that their home screens will be populated by ComScore top 50 properties such as Yelp and The Huffington Post. Actually, I always ask techies pitching me an awesome new app to show me their phones, and usually they don’t have anything other than ComScore 50 properties either.

So are apps over? Of course not. But the initial scrum is over, and apps are now just another form of entertainment vying for consumers’ fickle attention. And just like other mass media, they area subject to a power law, where a few apps get almost all the attention.

This story also appears on CNET and is published here with permission.