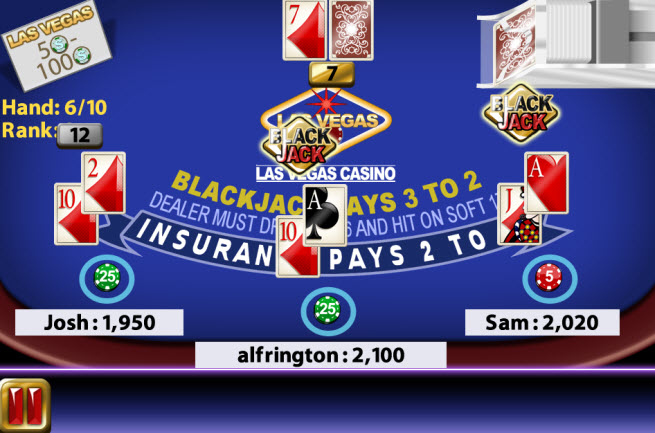 Mobile Deluxe is launching its Big Win Blackjack game today on the iPhone, iPod Touch, and iPad. In any other time, that wouldn’t be very exciting, and game developers would scoff at it.

But anything that has to do with online casino games these days is hot, and it might be possible for Mobile Deluxe to cash in on this trend. By layering a new business model (free-to-play games where users play for free and pay real money for virtual goods such as casino chips) and a new broad-reach platform (Apple’s iOS), casino game makers are going through a renewal.

Stranger things have happened. Who would have thought, for instance, that a social poker game would put Zynga on the path to a billion-dollar initial public offering and a $10 billion valuation? And the Justice Department’s reinterpretation of a law in December paved the way for the legalization of online gambling. That pumped up Zynga’s stock and led to some interesting deals, such as International Gaming Technology’s $500 million purchase of Facebook casino game maker Double Down Interactive.

Mobile Deluxe, based in Santa Monica, Calif., has been making games since 2003 and has grown to 30 employees without any outside money. The Big Win Blackjack game is a free-to-play title with touchscreen controls and tournament play. Players can take on multiple hands at a time, and the app teaches you how to improve your skills. With the Professor Blackjack mode, for example, you can learn the basics of the game and how to count cards.

“With Big Win Blackjack, we’ve created a game that will captivate the most experienced players and those playing for the first time,” said Josh Hartwell, the company’s chief executive. “It teaches users everything they need to know about the game with premium graphics and fluid game play.”

The casino is ad-sponsored. Players can spend real money on additional chips and pay their way into high-limit rooms. Mobile Deluxe’s Solitaire Deluxe game has been downloaded 6 million times.

Game developers can laugh at this simpleton game creation. And there are tons of rivals out there, all of them copying each other in some fashion. On mobile platforms, Playtika has risen to prominence with Slotomania, and FishSticks Games has gathered an audience for Slots Journey.

But what if Mobile Deluxe uses this casino game frenzy to earn itself a big valuation and then climb up the food chain, using the casino game money to finance higher value games? Who would be laughing then?