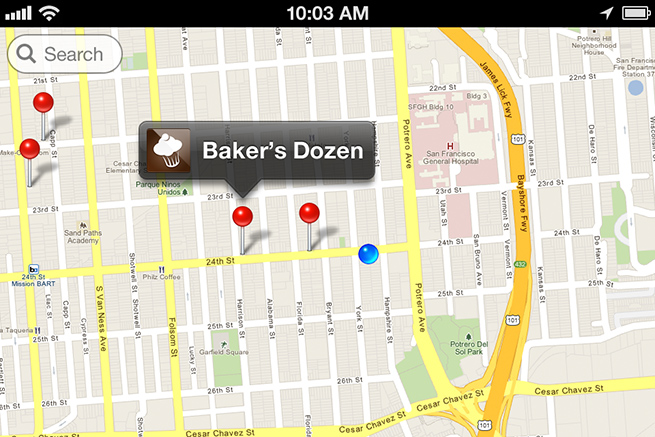 Hot mobile payments startup Square has upgraded its customer-focused Card Case app for iOS and Android, which can let you pay hands-free at Square merchants, with a new name (“Pay with Square”) and the ability to discover nearby Square merchants.

Square is hard at work trying to disrupt the way merchants and customers do transactions. Recently, the company launched its Register app for iPad to help its more than one million merchants ditch their cash registers. On top of that, its regular Square app for Android and iOS is helping merchants take credit cards using their phones, and the Pay with Square app helps customers by speeding up transaction times.

Now the updated Pay with Square app will add more disruption to the marketplace by encouraging Square customers to visit Square-enabled merchants. Using GPS and Google Maps (see above) on your iPhone or Android device will let you see where the nearest Square merchants are located. When you tap on one of those merchants, you can also see relevant info like hours of operation, menus, specials, coupons, comments, and more.

The app also adds in social elements to viewing merchants. When you look at your merchant list, you can now tweet about a merchant on Twitter, text message details about the merchant, or e-mail a link to the merchant. Facebook sharing functionality will be added “soon.” From the same merchant view, you can also now favorite specific merchants for future reference.

Square Director of Products Megan Quinn told VentureBeat that more than 75,000 merchants have now signed up for merchant discovery. Just a few weeks ago, Quinn said, that number was at 40,000, a sign merchants are enthusiastic about taking part. “With all of these features, we’re enabling a more personal transaction,” Quinn said.

Check out more images from the new Pay with Square app below: