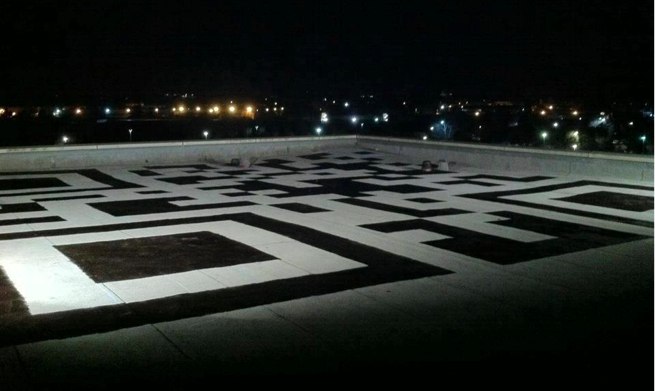 The mark in question is a gargantuan, scannable QR code taking up 42 feet of rooftop space atop one of Facebook’s new buildings.

The code was painted by crafty Facebookers during a company hackathon in February. The story goes that chief executive Mark Zuckerberg announced a “Space Hackathon,” via Facebook of course, to encourage team members to make the new office space their own. Mark Pike, an associate on the intellectual property team, decided to take the call to action literally. 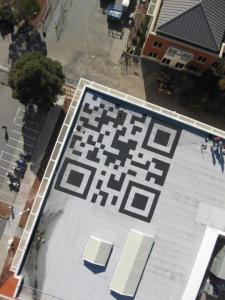 “Hack yeah! I’d like to paint a gigantic QR code somewhere so we can RickRoll online maps, or point people to our careers site, or send them to a ‘Clarissa Explains it All’ GeoCities Page,” Pike wrote in a Facebook post that became the catalyst for a late-night rooftop painting session.

After several planning sessions, a group of employees purchased the fbco.de domain and came up with a plan of attack. When the hackathon rolled around, they headed up to the roof, determined the best spot for the most visibility, and set about painting the code with, “chalk, twine, paint rollers, a few drums full of black paint, and some cold beer,” according to Pike’s description.

The team’s efforts proved successful. The 42-foot code can be scanned from the skies, and will soon start appearing in satellite captures of the area. What scanners will find, however, remains a mystery. The code, for now, simply redirects to a “coming soon” landing page.

“The next time you zoom in on Facebook from a satellite map or find yourself flying into SFO, take a close look at our roof,” Pike said. “We can’t promise you wont be Rick Rolled, but we can promise something cool.”