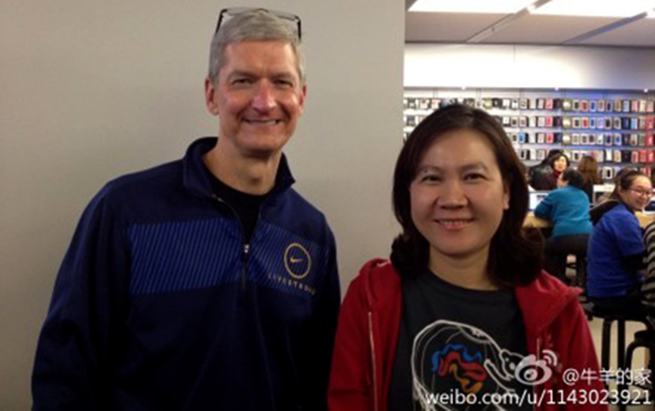 Apple CEO Tim Cook is visiting China this week for the first time since taking over as chief executive. The company is framing the trip as part of its push for “greater investment” in the world’s most populous country.

Cook previously visited China while Steve Jobs was still CEO to look into conditions at the controversial Foxconn plants that make Apple products. Jobs himself never visited the country, which is second only to the U.S. in Apple sales. Cook’s first trip as CEO signifies China’s growing importance to Apple, and its larger strategy for moving into markets outside the U.S. Cook noted in January that demand for the iPhone in China was “staggering.”

When he wasn’t being photographed with Chinese citizens at an Apple Store in Beijing (see photo above), Cook apparently met with unnamed “Chinese officials.” It wouldn’t be surprising if he sat down with the heads of mobile carriers to discuss getting the iPhone and iPad on other wireless networks, especially China Mobile, the world’s largest carrier by customers. Apple recently signed a deal with China Telecom to carry the iPhone, but it would really make a dent with China Mobile offering it as well.

Apple is also in the midst of a major court battle in China for rights to the trademark on the iPad, so Cook could be meeting with the legal team to discuss recent developments. Bankrupt Chinese firm Proview is trying to get the iPad banned in the country on trademark grounds.