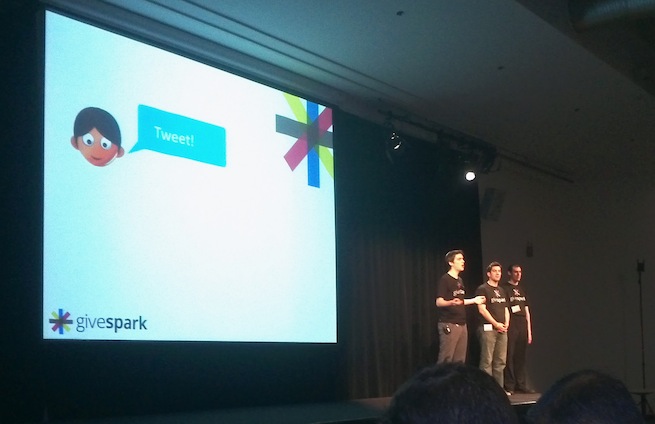 Celebrity investors are on the rise, with Justin Timberlake, Ashton Kutcher, Selena Gomez, Lady Gaga, and a number of other big names throwing money into hot new startups. But what if they took advantage of their influence to boost crowdfunding in pet projects? That’s what Givespark hopes to do.

The company, which presented at Y Combinator’s Demo Day Tuesday, has created a program that allows celebrities to interact with their fans and influence them to help fund the same projects they’re interested in. As we’ve learned from twitter Twitter, fans are obsessed with having a seemingly one-on-one interaction with their favorite celebrities. In turn, the actors, musicians, and reality stars have an opportunity to take advantage of their biggest fans.

Teplow and his team launched a test campaign with a few celebrities. The cause was for bone marrow transplants and the company wound up raising $87,000 for the cause.

Crowdfunding has been a hot button in Congress as well. The House passed a bill in March (the Senate following suit today) which allows companies to solicit money on sites like Kickstarter. Previously, you were not allowed to have more than 500 investors in your company without having to file with the SEC to go public. However, under the bill, anyone who gives less than $10,000 will not count toward that amount. The Senate recently passing a change to that JOBS act that also protects less-sophisticated crowd-investors.

Givespark is one of 39 companies presenting at Y Combinator’s Demo Day Spring 2012 event. Check out other cool companies making their debut here.