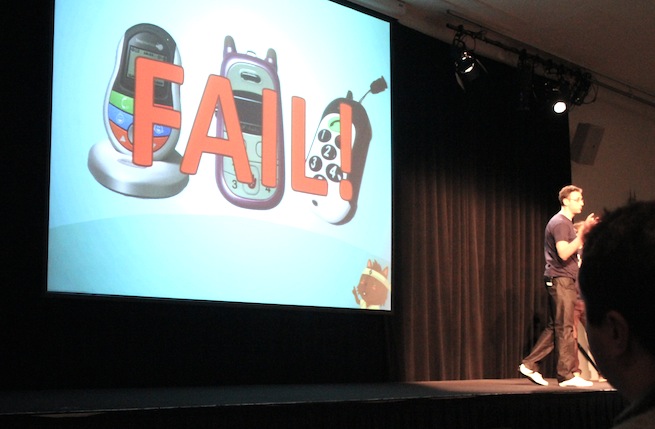 The problem with kids these days is … actually a problem with smartphones. Parents are hard-pressed to find a safe way let kids have the smart-gadgets they really want. Kyte, however, believes it has found a solution for Android phones.

“Your kids are smart and they hate [dumb phones],” said co-founder Martin Drashkov at the Y Combinator Demo Day today. “[But] with all the dangers out there, who wants to give a smartphone to a seven-year old? Every kid wants a smartphone and there are no good solutions.”

Kyte is an application that can be downloaded to any Android phone, activated and then given to a child. The app allows the child to make per-approved phone calls and only play authorized games. A kid is unable to leave the app to access the rest of the Android phone’s features. Parents have full control over the applications from the browser. Should the child lose the phone, or if there is a more dire situation, parents can also track the phone’s GPS online.

Drashkov explained that right now, there are 50 million children in the United States. At $10 a month, the company could make up to $6 billion a year. Of course, it would have to sign up every child in the U.S.

Mobile technology company Fuhu created a similar solution, but for tablets. Its Nabi “Kiddified” tablet, allows children to play on an application that cannot be shut off, and is otherwise controlled by the parents.

Kyte is one of 39 companies presenting at Y Combinator’s Demo Day Spring 2012 event. Check out other cool companies making their debut here.