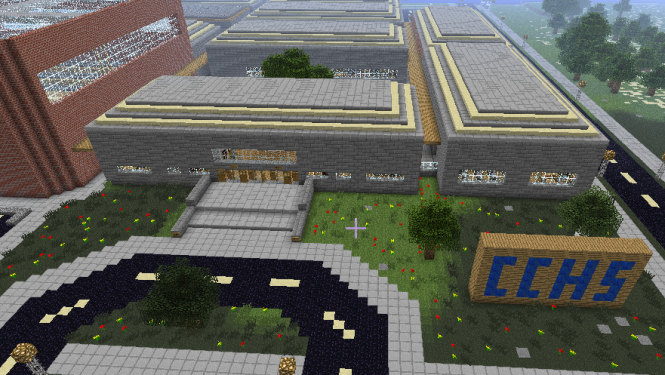 Storytellers and aspiring game designers have tapped into the nearly limitless narrative possibilities in Minecraft through downloadable adventure maps. Author Andrea Buchanan took this one step further by commissioning a custom map for her multimedia ghost novel, Gift.

Andrea Buchanan is the author of seven books, including the international bestseller The Daring Book for Girls which was made into a game for the Wii and DS. Buchanan is a fan of Minecraft and thought the world in Gift would translate well into a virtual adventure. “ After going to Minecon (the Minecraft convention) last fall, I thought: How fun would it be to have a Minecraft map of Gift? And so the idea was born,” Buchanan said in an interview with VentureBeat.

Buchanan commissioned adventure map creator Vechs to develop the Gift world. “One of the things I love about Minecraft is how open-ended it is — sure, there’s a way to “win” the game, but winning isn’t even the point. And that makes it ripe for player exploration and innovation,” said Buchanan. “When I came up with the idea of having a playable map of the world in Minecraft, the map maker who immediately sprang to mind was Vechs, who’s famous for his Super Hostile series of Minecraft maps.”

Gift’s story takes place in three distinct locations: a Southern California town, a dream world, and a ghostly underworld. Vechs’ map recreates each of these areas, and players explore them while hunting for special blocks and fending off Minecraft’s signature baddies.

“I think [the map] is a fantastic complement to the book — and playing it after reading is quite fun because you can recognize all the locations from the story! The Underworld in the map is possibly even scarier than the Underworld referenced in the book!,” said Buchanan.

The map launches alongside the digital book March 27 and is free to download on Gift’s website. Buchanan also enlisted the help of accomplished Minecraft players Joe Hills and Paul Soares Jr. to do “Let’s Play” YouTube videos for the adventure map. Soares, who was the first person to film instructional videos for Minecraft, intends to play the game alongside his teenage daughter who has read Gift.