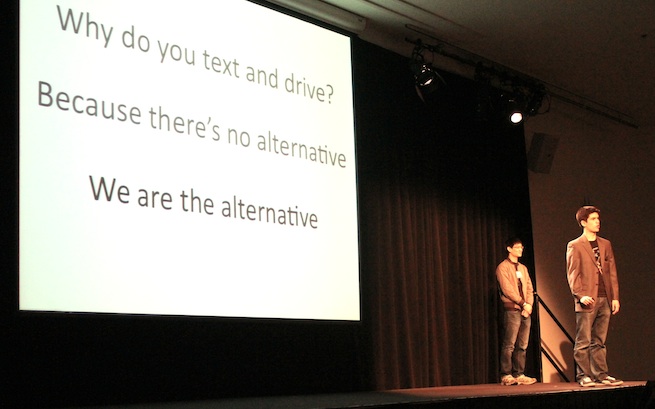 “I’m from the future, and it’s awesome,” said Sonalight co-founder Spencer Skates while sending a text message using the app.

Sonalight is a Siri competitor for Android phones, but it is meant to be used while on the road to prevent the accidents and tickets that go along with texting and driving. Skates demonstrated the application to a crowd at the Y Combinator Demo Day Tuesday. He held his phone at his side, representing a phone resting on the median between the driver’s and passenger’s seats. Skates asked Sonalight to send a text message, the female computerized prompted him to dictate the text, then read back his words verbatim and, with permission, sent the text.

“I want to point out that this is a good thing to do without making a lot of money…this app saves lives,” said Skater.

The demonstration was impressive given how far the phone was from Skates’ mouth. However, like most rooms during a presentation, it was pin-drop quiet as he performed the demo. The app might not be as responsive when the hum of an engine, honking, and the car radio detract from your voice.

Siri users often complain about needing silence to get the feature to react. Indeed, Parks Associates did a survey of Siri users and found that only 55 percent are satisfied with the product. Placing calls and texting are the of the most used functions of Siri.

Sonalight hopes to move its app beyond the smartphone and onto all connected devices, including televisions. It’s timely as rumors are swirling about a potentially Siri-powered television by Apple.

Sonalight has already sent over 500,000 text messages. Customers pay $20 a year for the service.

Sonalight is one of 39 companies presenting at Y Combinator’s Demo Day Spring 2012 event. Check out other cool companies making their debut here.