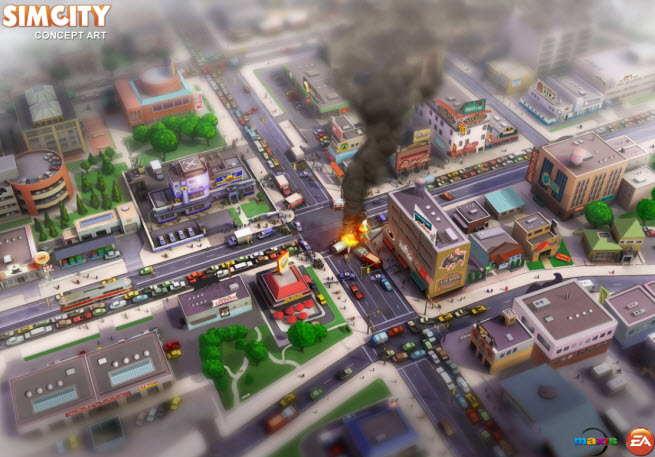 Inside the Maxis studio in Emeryville, Calif., the next SimCity is taking shape. The new game won’t debut until 2013, but Electronic Arts recently revealed enough of it to get longtime fans of the series — which originally debuted in 1989 and hasn’t had a real blockbuster version since 2003 — salivating for more. 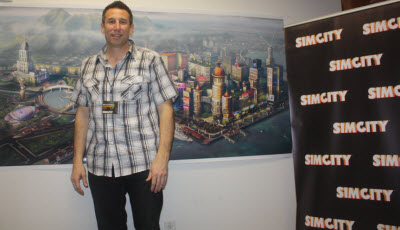 We went to the studio and got a sneak peek in a briefing from Kip Katsarelis (pictured left, see our interview), lead producer at EA’s Maxis. Katsarelis revealed that the team has envisioned a huge game that takes advantage of a full decade’s worth of progress in computing power. The new SimCity is going to have outstanding graphics and a mind-blowing level of detail, but it will also be easier to play. That is a must, Katsarelis said, in an age of simple city simulators on Facebook.

As with the earlier games, you serve as the mayor, setting the policies that allow your city to grow as you wish. If Maxis pulls this game off in the right way, you’ll be happy running your town, and the company could have a  blockbuster hit. 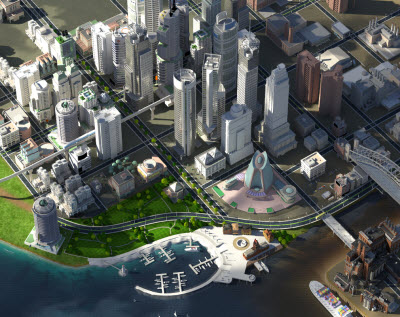 The new, reimagined game will have a constructable, full 3D world based on what EA calls its GlassBox Engine — simulation software that enables an intricately connected world.

“We track every Sim [person] in the world,” Katsarelis said. “We know if that Sim is sick or happy.”

Ocean Quigley, creative director, said in the briefing that the engine gathers all of the lessons of games such as The Sims, which simulates individual people and families, and brings them together on a much greater level.The game does not take the programming model of The Sims and scales it up, since it was never meant to grow that big. The developers simply redesigned it from the ground up. 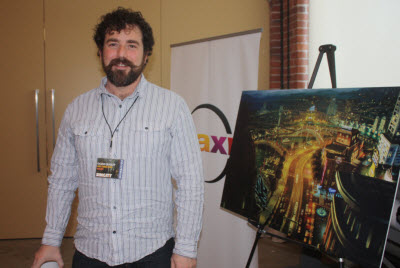 Each building in a city is now fully simulated, Quigley (pictured left) said, with full details that describe its purpose, show its status as a working cog in a larger world, and translate its impact on everything else. It is a world designed from the bottom-up, put together by a team of around 80 people who have already been working on this for a year or two.

“Everything is connected,” Katsarelis said. “One of the key pillars here is the way that SimCity makes you think about the world. To prove that, Katsarelis rolled some giant bowling balls through a town to show the havoc they cause as they crush each tree or building.

Each vehicle, person, or building is considered an agent, which lives in the world and interacts with the objects near it. The simulator can support tens of thousands of these, and they trigger certain rules when they arrive at a destination. For example, a truck may drop off water at a containment tank, which will then be able to supply that same water to a home. At a glance, you can look at an overhead map to see which parts of your city need power or other resources. As with older SimCity games, you can create a zone for industry, commercial, or residential buildings, and construction will organically grow buildings in those zones, as agents deliver the necessary resources for this to happen. With enough zoning, you’ll have lots of jobs and many Sims moving into your metropolis.

Wherever you look, you’ll notice details. Businesses will have fictitious names on signs that make the city blocks look alive. The graphics have cool features: clouds, smoke, sunlight glinting off glass windows, waves and boat wakes in the water, and the flashing lights of sirens. The simulation uses depth of field, where the section you are looking at is in sharp focus, but more distant objects are fuzzy.

Despite all of that, the game is designed to run well on PCs that will be about five years old by the time it launches. It should have sufficient speed to run without boring gamers to death because it is too slow. 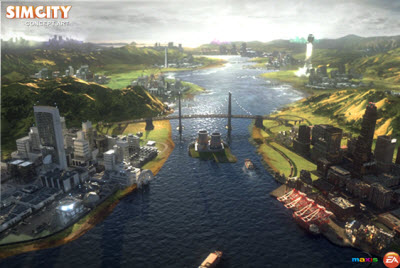 If you haven’t built enough police stations, you’ll notice evidence of crime, like graffiti. Characters such as arsonists, driving black vans with orange flames, will show up and set fire to buildings. If one is burning, it will produce smoke that contributes to pollution. The fire can burn individual citizens — or Sims — who will cry for help. An ambulance will be dispatched to pick up the burning Sims, douse them, and take them to a hospital. But if the hospital is full, the Sims will be unhappy, and that will lead to further problems for the city. Meanwhile, a fire engine is on its way to the original crime scene. If it gets there in time, it can put out the fire. But if not, the flames will spread.

Each Sim will have a mind of its own with wants and desires. If the Sim has no job, it may organize an Occupy-style protest at your City Hall and demand work. The Sim will be unsatisfied at home and spread more unhappiness. Eventually, the Sim may move out and leave the city, and abandoned buildings will bring down the property values in the neighborhood. Stores where your Sims used to shop may shut down.

Maintaining your city is a constant balancing act. If you build a lot of parks, you’ll have less land for commerce, industry, and residences. But the values of the homes alongside the parks might be high, and you’ll be able to collect more property taxes. You can raise taxes to build a lot of infrastructure. But that may drive people out of your city to towns with lower rates. You might be trying to build your dream city, but if you’re not careful, you may create a ghost town.