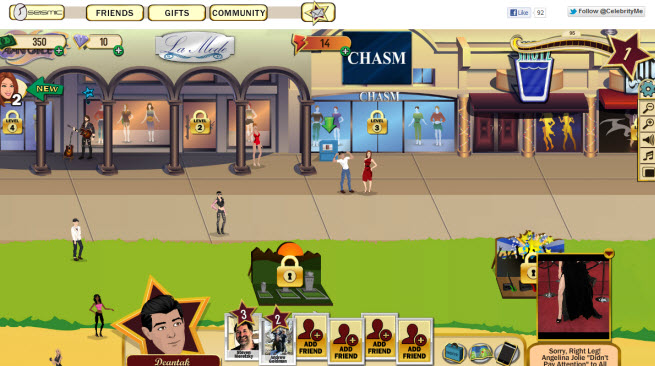 Social game startup Seismic Games is launching CelebrityMe, a new Facebook title that lets players live out the fantasy of being a celebrity. 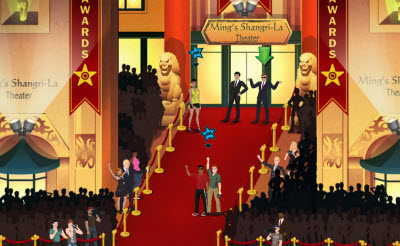 The new game is an attempt to find a niche — in this case, the genre of character-driven games related to celebrity culture — that big companies such as Zynga haven’t occupied on the social network. While everyone else is building social worlds, Seismic wants to create fun characters.

“We’re not trying to do what everyone else is doing,” said Eric Gewirtz, chief creative officer and co-founder of Seismic, in an interview with VentureBeat. “Console game companies have become risk averse. We think there is room for innovation in social games.”

Los Angeles-based Seismic Games came out of stealth in January when it announced it had raised $2 million from DFJ Frontier, venture capitalist Tom Matlack, and other entertainment industry investors. The company was started by Gewirtz, Greg Borrud (chief executive) and Chris Miller. The 20-person team includes a lot of veterans of the hardcore game industry; they have worked at places such as Pandemic Studios, Activision and Vivendi Universal. Their approach is to try to create addictive games that emphasize fun, rather than analytics.

Their first effort is not unlike The Movies, the tongue-in-cheek movie career simulation game created by Peter Molyneux and Lionhead Studios for the PC in 2005. But there aren’t a ton of other games like it where you can pretend to be a celebrity.

In the CelebrityMe game, you start out as a new arrival in Venice Beach, Calif., and try to land gigs as an actor. You make friends, go to parties and buy clothes that gets you noticed. You learn the ropes and work your way up to being a star. You hang out with the rich and famous, avoid scandals, and try to land roles that will put you into center stage. 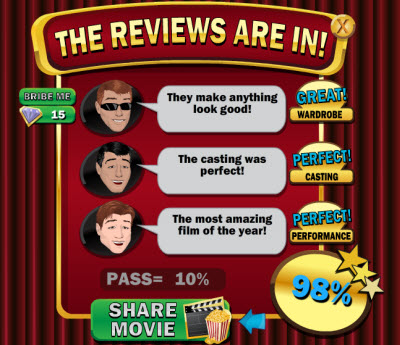 In that way, Gewirtz thinks of the title as a character-building game with a narrative. You can customize your celebrity with thousands of combinations of hair styles, facial features, clothing and accessories — all of which can provoke a reaction from your audience and critics. The game helps you create simple animated music videos or movie clips that you can share with your friends. The more people like those animations, the more you rise as a star.

“Facebook is all about expressing who you are to the world. CelebrityMe takes it one step further by tapping into players’ real world interests and dreams and delivers on the fantasy of living the celebrity lifestyle,” said Borrud. “CelebrityMe gives players the tools to express not only who they are, but who they want to be, and lets them live out and share these fun aspirations with all their Facebook friends.”

Activities include going to nightclubs and getting noticed by the paparazzi. If you get drunk and get into a fight, that will hurt your reputation. You get a “redo” if you bungle the task and want to try again. Over time, you build an entourage. You need help from casting agents, producers, directors, stylists and fellow stars. Eventually, you’ll be getting gigs for Oscar-quality movies, if you play your cards right.

There’s a limit to how much user-generated content is allowed. Initially, you have limited choices about what kind of film you want to shoot. You have to play certain mini games well to get your movie rated higher. If you want better ratings, you can bribe the critics with faux money.

The movie shorts have a few still scenes and may be good for some laughs. Players may enjoy sharing them with friends at first, but they will probably also get the urge to gain more control over the actual content over time. Gewirtz said the team will grant more freedom to experienced players over time, but exactly what that means isn’t yet clear.

“We think these are mainstream fantasies that appeal to both genders and they could get a wide international audience,” Gewirtz said. “On Facebook, the fantasies today are more like build a castle, a farm, a mafia or a city.”

The key to whether the game succeeds or not is whether gamers truly enjoy the short movies they create and the sense of humor that comes with them. They may (or may not) like the fact that you can’t do that many of the bad things that come with being a movie star: hookers, drugs, thugs and generally bad behavior. There are no limos or jets yet either. But the company will introduce a reputation system over time that will allow you to pursue alternative paths.

“It’s a light-hearted approach to celebrity,” Gewirtz said. “We stay on the family friendly side, though you can decide to be a ruthless bad-boy rocker.”

You can buy lots of clothes and, if these generate a better reaction from the audience, you’ll get higher ratings in movies. Rival games include the Electronic Arts’ The Sims Social and CrowdStar’s It Girl, but neither really highlights being a celebrity.