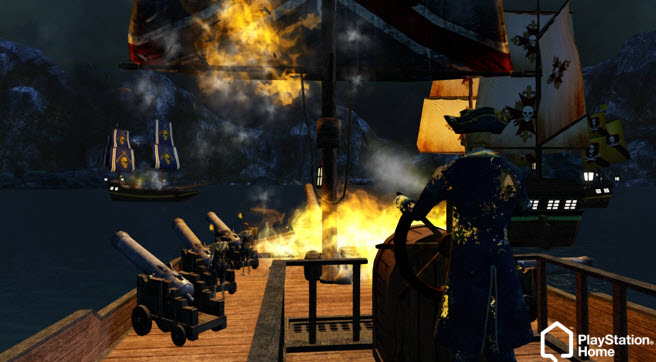 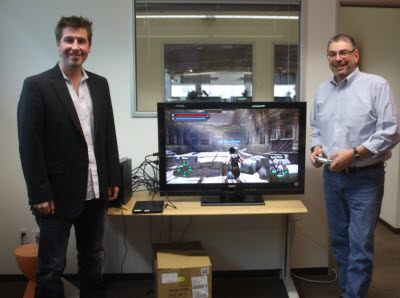 The new games, which use high-end graphics, reflect Sony’s goal of keeping its hardcore gamers entertained with free-to-play titles in between major launches of PlayStation 3 console games. Sony wants the games to stand out as “immersive,” with a higher quality level than you normally see for free-to-play games, in which users play for free but can pay real money for virtual goods.

Sony will keep investing in PlayStation Home, which has more than 27 million registered users. The company said the average user spends 70 minutes in Home per session, and last year it had 44 million engagements.

The titles are part of PlayStation Home’s redesigned core experience, which debuted in November with new games and genre-based districts. The world is now essentially a 3D social-network for hardcore gamers.

“We’re listening to the feedback of our fans, and they’ve told us they want to shoot each other, even in PlayStation Home,” said Chris Mahoney (pictured left with Home manager Jim Wallace), senior business manager of PlayStation Home, in an interview with VentureBeat. “We are going to blend deep, immersive games with casual-game styles and the freemium model.” 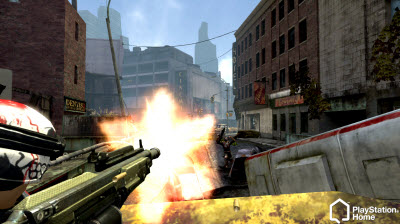 The games include the pirate-warship game Cutthroat: Battle for Black Powder Cove (pictured at top). In that multiplayer game, as many as four players band together on a ship, with one captaining the vessel and three manning the cannon. Cutthroat is available now in PlayStation Home as part of the new Adventure district, which is a lush tropical 3D world with an ancient temple, a sweeping coastal shoreline, and a beachfront bar.

In that district, you can directly join a Home game with your friends. In Cutthroat, as many as 24 gamers can participate in a six-ship naval battle, firing cannonballs at each other with upgrades such as longer-range cannons or fiery cannonballs available for purchase; you may spend anywhere from 99 cents to $50 on transactions in this game. Gunners can switch from one side of the ship to the other, and ammunition options (like a “barnacle ball” that slows your enemy down) add variety. As the cannonballs keep crashing in this noisy game, the losing ships all go to the bottom of the sea. Of the three announced Home titles, this one looks the most fun and the most polished.

A second game in the works is the post-apocalyptic shooter No Man’s Land (pictured right), created by United Kingdom-based developer Veemee, which will be available this spring. No Man’s Land is an advanced-third-person shooter with high-end graphics, altough it does not allow complete freedom of movement, partially due to the memory limitations of PlayStation Home. With No Man’s Land, you maneuver from one vantage point to another by clicking where you want your soldier to run. You can choose from several directions and move from barrier to barrier, using cover-based game mechanics. In this game, a team of four can play against another team of four.

“We decided to go all-out and invest in a great action shooter inside Home,” Mahoney said. “This is an opportunity to build really deep, immersive spaces.” 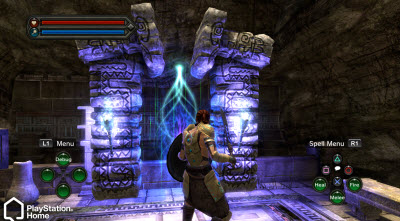 Lastly, Sony will also launch Mercia (pictured right), a multiplayer role-playing game set in a fantasy world. It has treacherous dungeons, magic spells, and plenty of weapons and enemies. While it also has to adhere to the memory limits of Home, Mercia seems quite immersive because you never have to wait for a loading screen: When you approach a door, the next room loads while the door opens.

The gameplay is a bit simplistic with basic hacking and slashing at enemies. You can, however, craft gear and manage your inventory. The art style has Mayan influences, and it looks pretty.

The game will launch this summer and is being developed by Lockwood Publishing.