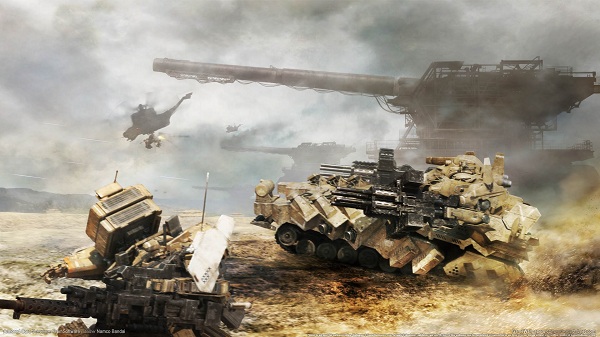 The next sequence follows a convoy going through the desert as engineers and technicians test out bare mech parts. A pair of giant-sized Gatling guns shoot into the distance. Shells whizz through an ammo belt. A sniper cannon’s recoil shakes a nearby barbed-wire fence. A bunker-busting rocket explodes beyond a protective wall in slow motion. Interspersed between these shots are quick glimpses of gracefully maneuvering armored cores.

This introduction does two things: establishes a machine aesthetic and teases the expectations that game has for the player. The former is rather obvious and blunt — you can’t avoid noticing the industrial feel with all those hard edges, hanging cables, and exposed rivets and bolts, all tinged in a film of grit under an overcast sky. The latter is a peek of fluid motion amid a flurry of hardware for your gawking eyes. Momentary glances of elegant armored cores quietly dance to a measured pace of focused destruction that hints at their pilots’ mastery over these humanoid shells.

From mechs to muscle cars

The imagery of Armored Core speaks to a very American sentiment in my mind: the glory days of manufacturing. And no era better represents that idea than the auto industry’s heyday of the muscle car: those gas-guzzling biceps carved from blocks of aluminum that enslaved the pavement with a combination of style and power.

I have two uncles who probably spend more time in their garages than they do with their families. These guys grew up in the ’60s and became men in the ’70s. My Uncle Joe restores classic Corvettes. His most recent is a ’66 Fastback Coupe. Uncle Mick puts together race cars, and from this endeavor, he holds close a picture of his cherry red ’55 Chevy Dragster flying through air during a competition. It’s a scene that is at once thrilling and a point of pride for Mick.

Joe meticulously rebuilds his current obsessions with an eye that I find myself having while playing Armored Core V. I spend a lot of time in the game’s workshop, tuning my machine with new engines, boosters, and fire control systems — this short list hardly covers all of the available options. I pore over new weapons as they become available. I reassess my armored core to adjust to my evolving play style. I’m dangerously close to becoming a “mechhead.”

Mick upgrades his vehicles with the biggest and loudest equipment he can get his hands on. For that ’55 Chevy, he removed the stock 283 V8 and installed a 454 big block in its place. It’s the kind of engine that makes a statement by sticking out of the top of the hood. He added two four-barrel carburetors on a high-riser and straight-pipe headers, making the Chevy a track-only racer designed for screeching down the quarter-mile dragstrip.

In Armored Core, I also create such specialized machines. Like my high-mobility core that has fast movement, great energy recovery, and quick boosting. Or my tank-track core that is a wall of impenetrable steel and super-heavy weaponry. Or the long-range, sniper-cannon-wielding sharpshooter on quad legs for reduced recoil. All the while, I’m carefully paying attention to the gameplay-defining attributes of the parts that comprise my cores, like stability computation, muzzle velocity, and energy conductivity. It’s a depth of tuning that I’m sure my motorhead uncles could appreciate. 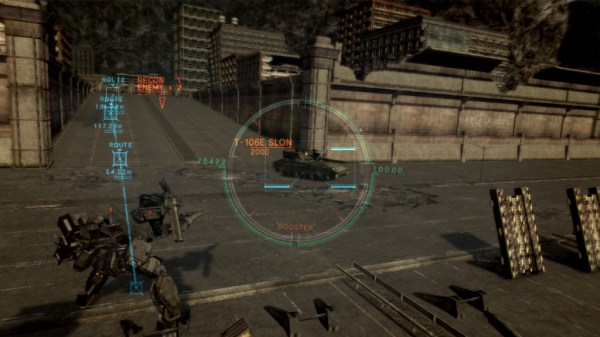 Becoming an instrument of destruction

But I can’t just coast my way to victory by relying solely on the machines I’ve constructed. Armored Core puts a premium on skill and proficiency, and learning and mastering the wide array of systems that govern movement, speed, acceleration, turning, evading, and targeting takes practice.

Armored Core V developer From Software is no amateur in this regard. Michael Abbott, who runs the Brainy Gamer blog, applied the Japanese concept of kendo, “the way of the sword,” to From’s Dark Souls and observed that the studio similarly focused on the practice-to-perfection concept. Abbott writes that “the world of Dark Souls functions as a kind of virtual dojo, a stern but playful host for rigorous lessons in persistence, patience, discipline, precision, mastery, and charting an optimal path.” Ultimately, Dark Souls players aim for “Ki-ken-tai-ichi,” which means “spirit, sword, and body are one.”

This idea isn’t even new to the Armored Core series (V represents the 14th console installment). Ollie Barder, editor for mech-enthusiast blog Mecha Damashii, argued that Japanese mecha is a futurist interpretation of the samurai, the social class of feudal Japan from which kendo originates, that emphasizes this melding of mind and body into one to become a single instrument. Your armored core, ultimately, becomes an extension of your body because you reach a level where you transcend the controller in your hands.

When you start your game, you have the option of organizing two types of “sorties”: Order missions and Story missions. Order missions are short exercises with one goal — usually to eliminate all threats. These enemies are mechanically asymmetrical to the player, such as tanks, helicopters, and single-purpose cores. They aren’t particularly challenging. Other Order missions pit you against one or more fully functional armored cores; these are symmetrical fights that I view as a sort of practice arena to try out mech configurations in a live environment.

Story missions are longer affairs, and depending on whether you’d give up part of your cash payout to refit your machine midway through, they’re also endurance tests for your armored core. Like with the Order missions, their purpose is to give you space to practice. Mostly tellingly, the game scores your performances in all these exercises with the traditional Japanese ranking system (the highest “S,” then “A,” “B,” “C,” and the lowest “D”). 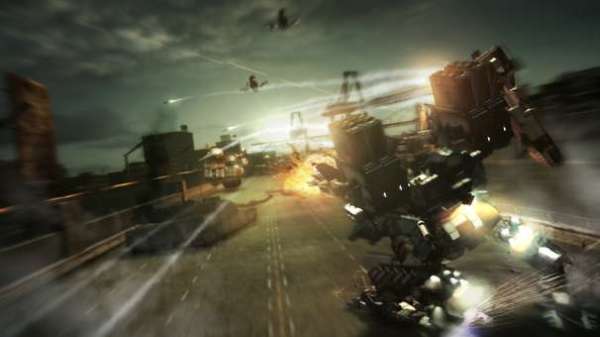 Ultimately, you’ll work toward excellence in execution, and what’s possible can be a breathtakingly beautiful show of skill. Through these test chambers, I gain the expertise and confidence to participate in online, ranked duels or five-on-five (up to four cores and an operator who manages the engagement from an abstracted, overhead view) conquest battles, where teams invade and defend territory on a map of fluctuating ownership. I’m satisfied in the knowledge that I earned these parts, that I built this core, and that I won or lost based on my piloting decisions.

It’s the kind of intensity that reminds me of a cherry red ’55 Chevy flying through the air.

Armored Core V was released on March 20, 2012 for PlayStation 3 and Xbox 360. The publisher provided GamesBeat with a PS3 copy of the game for the purpose of this article.